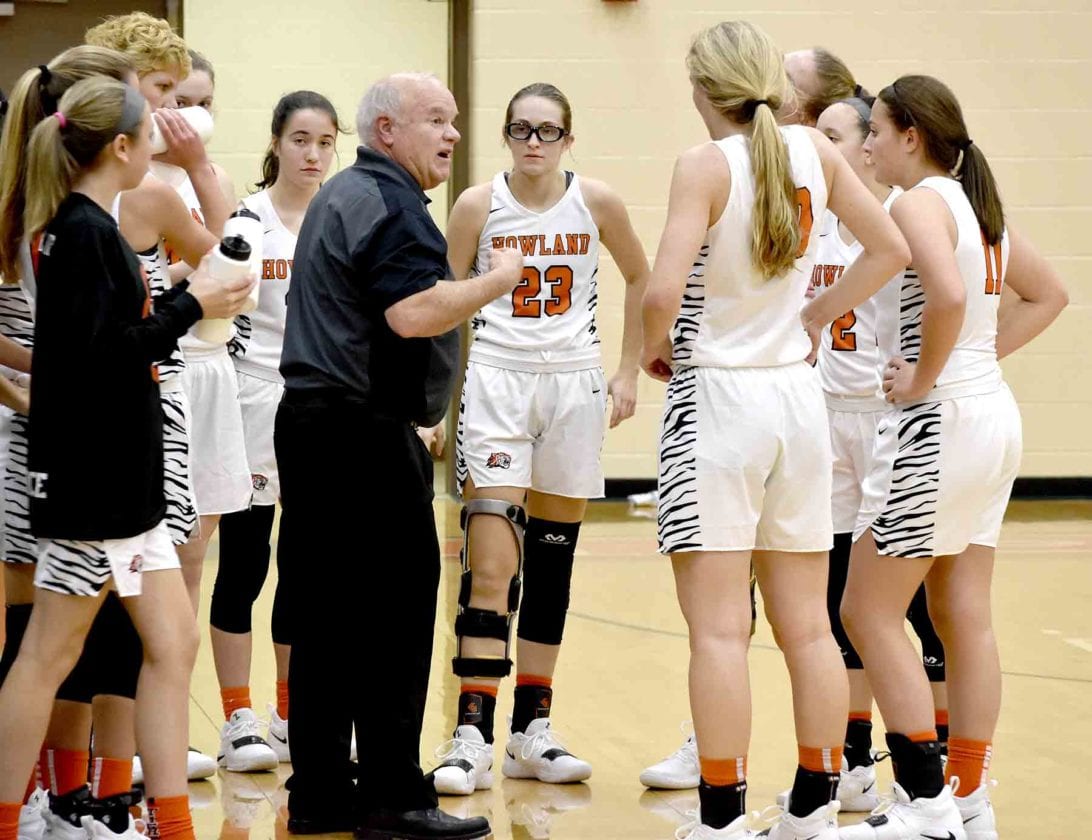 Tribune Chronicle / Joe Simon Howland coach John Diehl talks to his team during a timeout late in the first half of the Tigers’ 75-45 victory over Madison on Friday in Howland. The Tigers won their opening-round game of the Toni Ross Spirit Foundation girls basketball tournament.

HOWLAND — John Diehl isn’t the type of coach who starts the season by writing long-term goals in all capital letters on the whiteboard in the locker room.

Like a lot of coaches, the longtime Howland girls basketball coach focuses on consistent, daily improvement.

That isn’t stopping standout senior Alex Ochman from setting a goal of her own.

“He doesn’t really set any specific goals,” said Ochman as she stood next to her coach. “I know we all want to get to districts, and we want to win districts. That’s my goal — to get to regionals.”

At that point, Diehl, whose Tigers were three points away from that stage last year, chimed in. 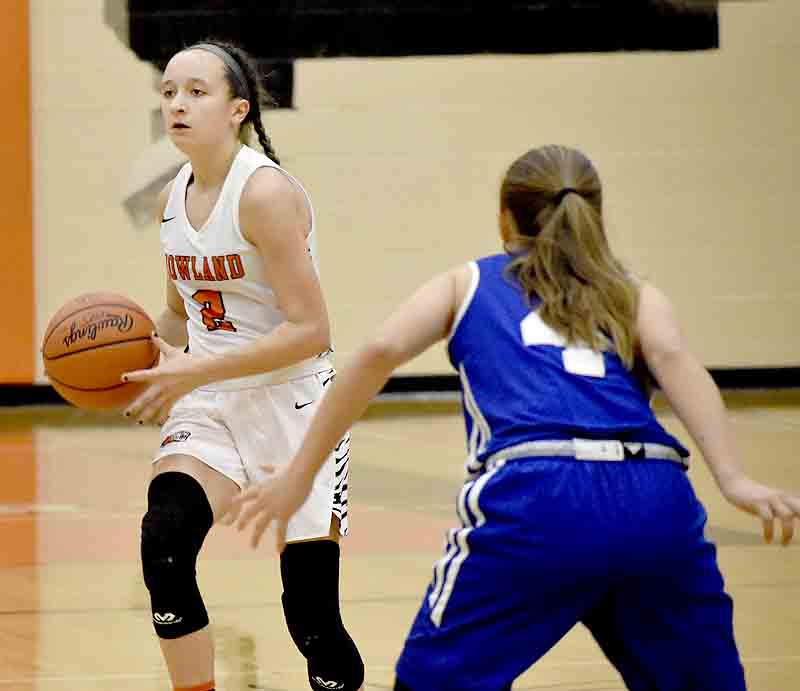 Tribune Chronicle / Joe Simon Howland’s Maria Dellimuti, left, looks to make a pass while being defended by Madison’s Chloe Bancroft in their game Friday in Howland.

It seems realistic after their season opener.

Ochman scored a game-high 27 points, and fellow forward Kayla Clark added 18 as Howland rolled past Madison, 75-45, in the first round of the Toni Ross Spirit Foundation girls basketball tournament.

The Tigers play South Range in the championship game at 7:30 p.m. tonight.

The Raiders, who beat East Cleveland Shaw, 62-46, in the first game, will present more of a challenge, but they’ll also have to deal with the inside presence of Ochman, at 6-foot, and Clark, a 6-1 senior. 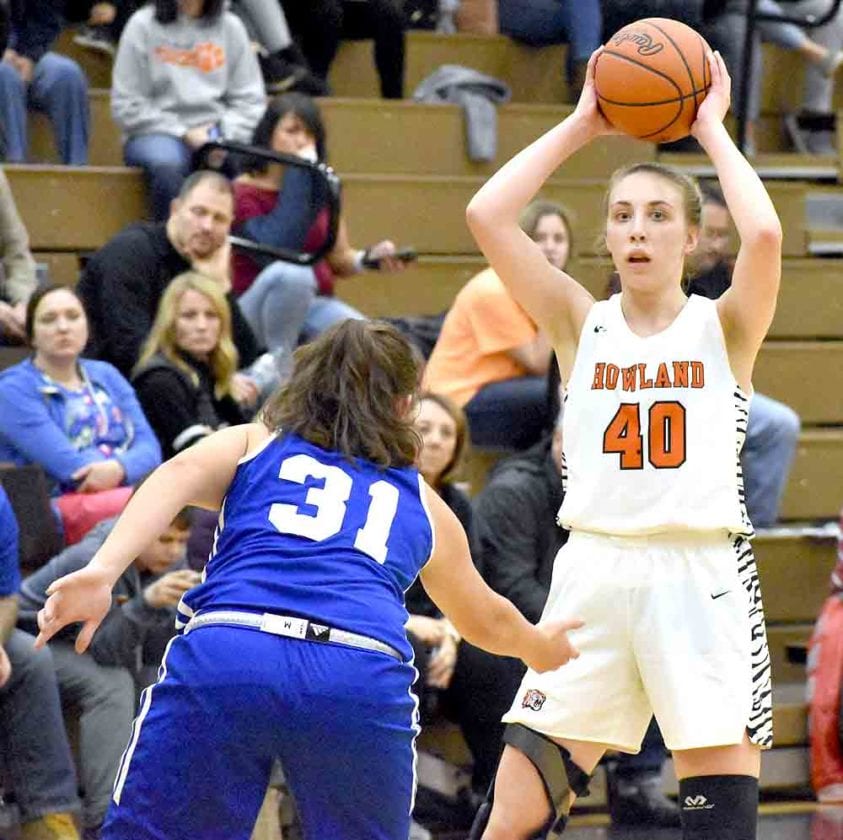 Clark added 15 rebounds against the Blue Streaks and was a big reason the Tigers led 10-0 just four minutes into the game.

She and Ochman made for a powerful inside presence for the Tigers, but with only one starter back (Ochman) and Clark coming off knee surgery, Diehl wasn’t sure how things were going to mesh coming into the game.

“I’m pleasantly surprised,” he said. “My big question mark going into the year was the point guard, and Maria (Dellimuti) has done a tremendous job. She doesn’t turn the ball over. She’s able to control (the offense). She had a real nice summer and a real nice fall, and she played well tonight. She’s kind of the key to our whole season because I know Kayla and Alex are going to score. The question is can we get them the ball? She’s done a nice job this fall of doing that.”

Dellimuti, a junior, scored eight points and had four assists, and Alyssa Pompelia added 10 points for the Tigers.

Howland never let Madison get back in the game after the strong start. The Blue Streaks trailed, 32-18, at halftime, and while they moved within 11 at one point, Ochman took control to put the game out of reach. 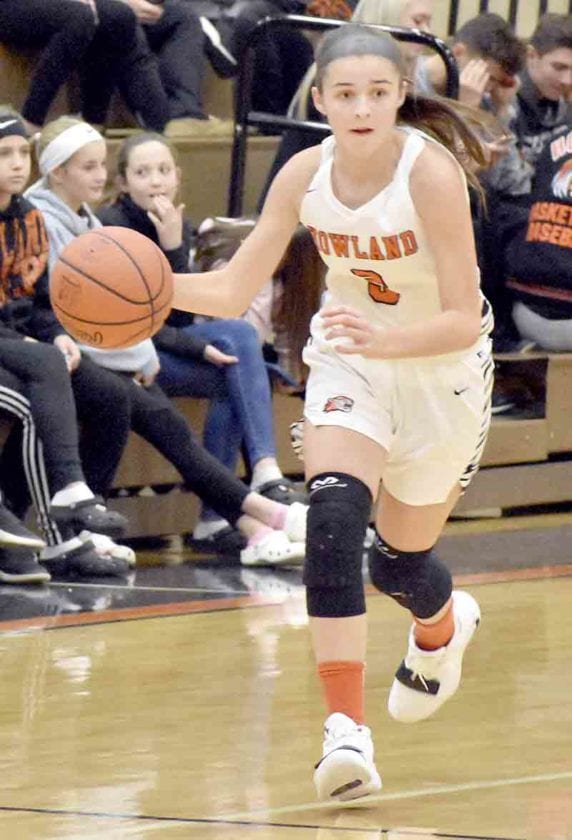 Tribune Chronicle / Joe Simon Howland’s Ashley Chambers dribbles up court during the Tigers’ 75-45 victory over Madison in the opening round of the Toni Ross Spirit Foundation girls basketball tournament on Friday.

A three-year starter, Ochman is excited about the makeup of a young team that’s exhibiting a lot of potential.

“This is going to be a really good team,” she said. “We’ll just keep progressing throughout the year. I don’t think there’s any limit to us.”

Even the more laid-back Diehl, who’s been coaching for 33 years, is excited about this group. After watching them through the preseason and then on Friday, he has good reason.

The Tigers have a good amount of both — as usual. 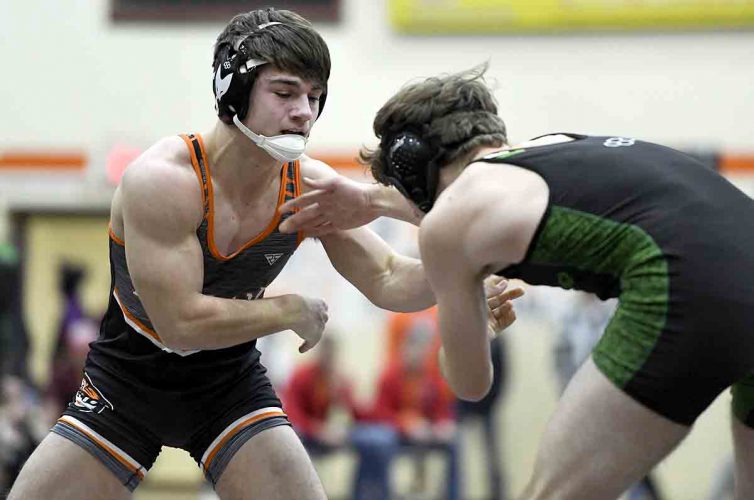