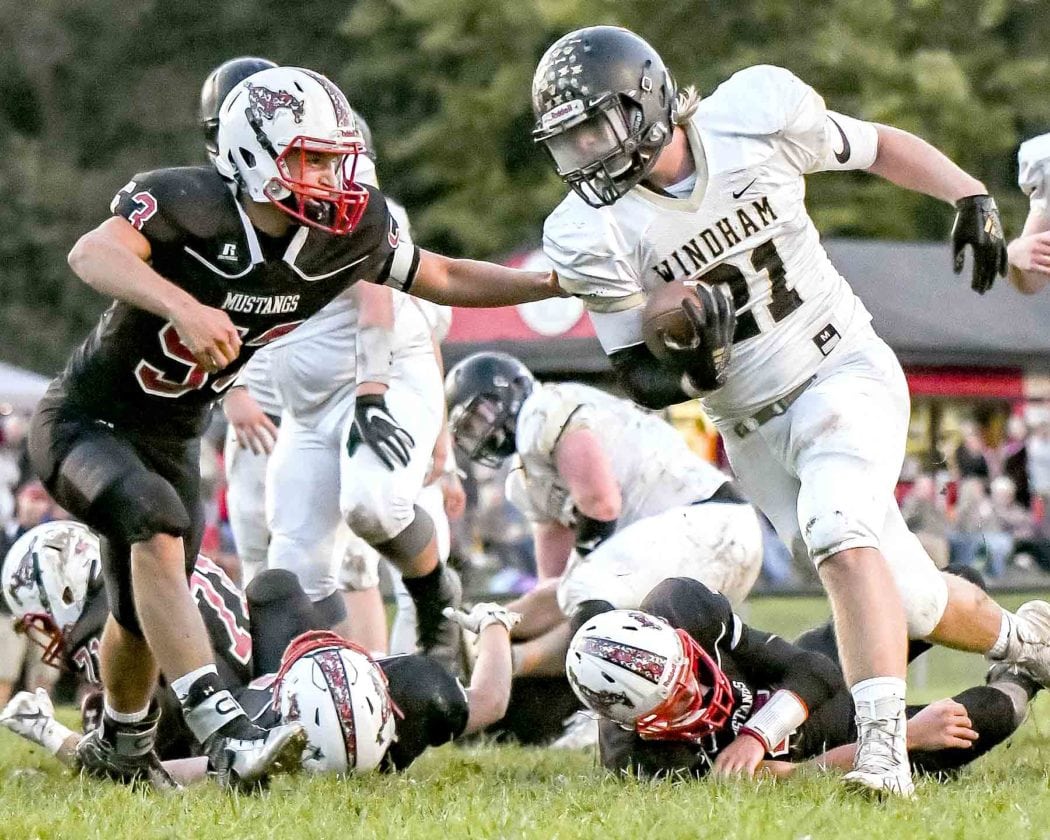 Windham's Mason Angle (21) rushes with the ball into defensive pressure by Mathews' John Smith (53) during their game at Booster Field in Vienna on Friday.

VIENNA — It was homecoming Friday night for Mathews High School. Unfortunately for the Mustangs, the Windham Bombers did all the celebrating in a 43-0 triumph.

“Last week was a tough one for us losing to Garfield,” Windham coach Jake Eye said. “We knew Mathews wasn’t going to be easy, and that they would have opportunities to burn us. I thought our boys came out and played good smash-mouth, hard-nosed football in the first half.

“We continued in the second half. That was our game plan, to go right at them. Our line played hard and we ran the ball well. Blaze (Angle) is improving at QB every week. We’re looking to continue the winning ways in our homecoming game next week against Newbury. We haven’t won a league championship in 31 years. We have goals for the rest of the season.”

Mathews received the opening kick and had to punt away. The Bombers marched toward the end zone. Junior fullback Mason Angle nearly scored the game’s first touchdown, but fumbled at the goal line. Senior receiver Ron Nix recovered in the end zone for the score. The extra point was no good to make it 6-0 with 7:55 left in the first. 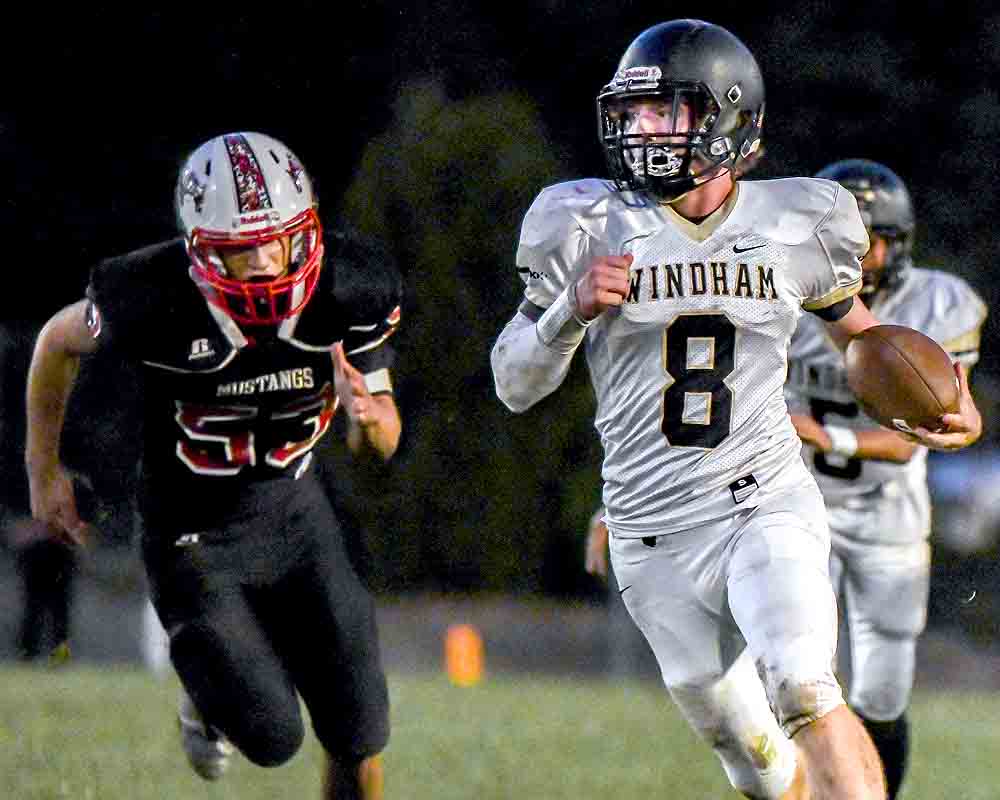 Windham's Blake Eye (8) breaks loose down the sideline with Mathews' John Smith (8) in pursuit during their game at Booster Field in Vienna on Friday.

Nix also plays defensive back and made the game’s next big play by intercepting Mathews quarterback Gabe Canter. Nix made some nice moves on a good return deep into Mustang territory. Angle finished the job this time with a 1-yard TD run. A successful 2 point try made it 14-0.

Mathews began to play some inspired ball and started moving the chains. The Mustangs put together their best drive of the game when Canter found senior D.J. Pierce open on the right side. Pierce’s 23-yard catch and run put Mathews in scoring position. The Mustangs got down to Windham’s 14-yard line, and took a couple of shots into the end zone, before turning it over on downs.

Mathews again looked to get on the board when junior J.J. Walsh intercepted Windham junior quarterback Blaze Angle. However, the Mustangs were unable to take advantage and Windham’s Bert Jones intercepted the ball back for the Bombers.

Senior flanker Hunter Shackleford showed some serious speed on his 14-yard touchdown run to make it 20-0 with 5:06 remaining in the second quarter.

Just over a minute later, Jones returned a Mathews punt 45 yards for another touchdown. A Mason Angle 2 point run made it 28-0 at the half.

Shackleford had another nice run early in the third for a 16-yard touchdown. Senior Tyler Collins’ 2 point run made it 36-0.

The Angle brothers led the way on the ground for Windham. Blaze had seven carries 79 yards and Mason eight carries for 72 yards. Shackleford had 10 carries for 61 yards to go along with the two scores.

Senior Blake Eye scored the games final touchdown on a 3-yard run at the end of the third quarter.