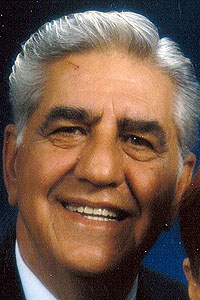 He was born June 12, 1930, in Pittsburgh, Pa., the son of the late Stanford and Marie Mueller Woomer, and came to Warren in 1946, where he attended Warren G. Harding High School.

Stanford excelled in baseball as a pitcher, playing for several local teams. He enlisted in the United States Air Force in 1948, where he continued to pitch while serving during the Korean War in Germany. He was scouted by several major league teams.

He was an avid fan of the Cleveland Indians and Cleveland Browns.

Besides his parents, Stanford was preceded in death by two sons, Stan and Robin Woomer.

Services will be held at a later date. Inurnment will take place in Howland Township Cemetery.

In lieu of flowers, the family requests that memorial contributions may be made to MVI Hospice of Youngstown in Stanford’s name.

A caring cremation will take place under the professional care of the Staton-Borowski Funeral Home, 962 North Road NE, Warren, OH 44483, 330-394-6200. Dedicated to Serving Your Loved Ones. This obituary may be viewed, and condolences sent to www.staton borowskifuneralhome.com.