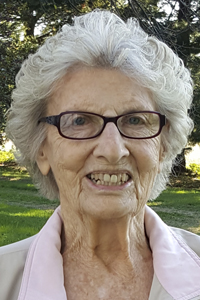 Marva was a 1949 graduate of Maplewood High School and was employed for a time as a factory worker with Kennametal Inc. in Orwell. She spent most of her adult life as a homemaker, raising and caring for her family.

Marva was a member of the Wildare United Methodist Church in Champion. She loved all animals, especially her cats and the wild birds she watched and cared for. She had quite the green thumb and had a yard filled with flowering plants and shrubs. Marva was known for her pie-making ability, and she also enjoyed playing cornhole and various other games, especially Scrabble and Rook.

Besides her husband and parents, Marva was preceded in death by a brother, Marvin Chronister Jr.; and a sister, Delores Church.

Due to the current public health situation the family strongly encourages everyone attending services to wear a face covering and observe social-distancing guidelines. Also, the family would like everyone to know that if you are not comfortable attending, please do not feel obligated to do so.

Friends may call from 10 a.m. to noon Wednesday at the funeral home.

Marva will be laid to rest next to her beloved husband in the Sager Memorial Cemetery, Bristolville.