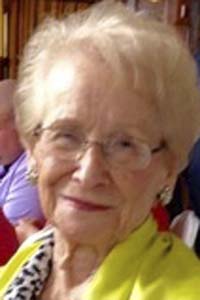 Dorothy was born in 1921 in Butler, Pa. She was raised there and graduated from Butler High School. It was there that she met Neil Shira, who served in World War II in Europe. After being wounded and honorably discharged, Neil returned to Butler where he and Dorothy (maiden name Gorencic) married in 1946.

The couple lived in Butler until 1957, when they moved with their children, three of them by then, to the Youngstown area. By 1990, Neil and Dorothy had become empty nesters and moved to Warren. After Neil’s death in 2005, Dorothy continued living in Warren until she passed away.

Dorothy Shira was a lover. She loved reading novels. She loved visiting with her many friends, and she loved watching professional sports on television, especially when the Cleveland Indians were playing — and trouncing — the dreaded New York Yankees.

Most of all, however, Dorothy loved her four children, and they loved her, as was obvious when you saw how much they cared for one another.

She was preceded in death by her parents and husband; one brother; and two sisters.

A private service will be held in the future for the family.

Dorothy’s family is grateful to the caregivers at Shepherd of the Valley in Howland. They provided exceptional care during their mother’s final months.

In lieu of flowers, please honor Dorothy life by making contributions to either Hospice of the Valley, 5190 Market St., Youngstown, Ohio 44512 or to Alzheimer’s Association of America, 408 9th St. SW, Canton, Ohio 44707, in memory of Dorothy’s husband, Neil.

Family and friends may visit https://www.peterrossiandsonfh.com/ to view this obituary, sign the guestbook and send condolences to Dorothy’s family.