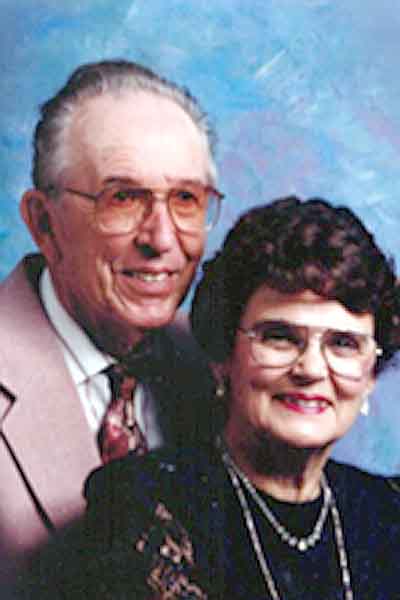 She helped her dad on the farm by driving the horse behind the disc in the fields and guiding the horse to run the hay fork in the barn. It was also her job to listen to the Cleveland Indians on the radio and run to the barn with updates.

She taught school years before she got her degree from Kent State. During college, she sang on the radio and wrote jingles. She worked at Packard Electric during the war years. After her marriage, Jane helped run Sportland, a busy sporting goods store in Warren, owned with her husband, Bill.

Jane began entertaining by singing with her sisters around the Gustavus / Kinsman area. Later, she performed with a gospel quartet throughout the state, directed choirs in several communities and sang and played with Bill in Dixieland bands in Ohio and Florida. Jane was a soloist but also played alto sax and banjo. She and Bill loved to dance, and she played and taught bridge. She enjoyed entertaining others well into her 90s.

Jane’s other great interest was travel. She and Bill visited all 50 states. One of their most memorable cruises was through the Panama Canal. Other highlights were trips to Mexico, Canada, Europe and a vacation “Around the World in 80 Days.”

She will be greatly missed by her daughters, Patricia (Harold) Wilson Joyner of Collierville, Tenn., Billie Jane (Douglas) Neuman of Niles, and Linda (Jack) Foster of Long Branch, N.J.; eight grandchildren and 11 great-grandchildren.

Jane is survived by her sisters, Arlene Logan of Gustavus, Shirley Keeler of Kinsman, and Mary Lou Kidwell, also of Kinsman.

The family is having a private service at Baumgardner Funeral and Cremation Service, 8569 Main St., Kinsman. Jane will be buried next to Bill in Johnston Cemetery in Johnston Township. Those wishing to share a fond memory or condolence may visit www.baumgardnerfuneralhomes.com