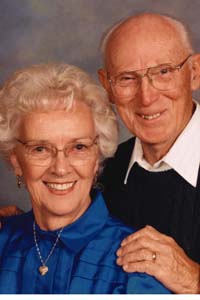 Noreen, the youngest of six, was born in Gislingham, Suffolk, England, on Nov. 27, 1925, at Six Bells to Fredrick D. Tuffs and Alice Mary Bridges Tuffs.

At just 17 years old she met the love of her life, Michael Kringeta, an American Soldier during World War II. The two married in 1944 in England and moved in 1947 to the United States, where she became a proud citizen.

Noreen, or GanGan as she was called by her family, was a longtime member of Grace United Methodist Church in Warren, where she served for many, many years on the Agape Committee blessing others with her love of baking. After working at Kresky’s, Noreen started her career at Packard Electric, from where she retired in 1984 as an inspector to travel the world with her husband Mike.

Together the two enjoyed many trips back to Europe to visit family, camping with their grandchildren and wintering in Florida.

She also enjoyed playing the organ, knitting, gardening, and most of all, spending time telling stories and playing games with her family.

Left to celebrate her life are daughters, Jennifer (Larry) Hardman of Atlanta and Judy (Keith) Watson of Warren; her son, Peter (Amy) Kringeta of Champion; grandchildren, Michelle Hardman, Amanda (Eddie) Colbert, Renee (Michael) Kempner, Johnathan Latham, Benjamin Kringeta, Kathryn Kringeta and Michael Kringeta; great-grandchildren, Jayden, Devon and Cameron, who were the light of her life; as well as many nieces and nephews across the globe.

Preceding her in death were her parents; siblings, Ivy, Fred, George, Dick and Molly; and her husband, Mike, who passed away in 2006.

Memorial contributions may be made to Grace United Methodist Church.

Visit www.lanefuneralhomes.com to share memories and condolences with Noreen’s family.