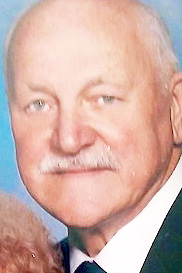 WARREN — Robert E. Powell, 89, of Warren, passed away on Saturday, July 13, 2019, after an extended illness, at Shepherd of the Valley in Howland.

Robert was married to the late Doris Milliron for 57 years, and she passed away in 2009. They loved and cherished their only child, Timmy, and he passed away at the early age of 10 years.

After graduating from Punxsutawney High School in 1948, Robert entered the U.S. Navy and served for four years, 1948 to 1952. He was a machinist and served aboard the USS Cascade and the USS Lloyd Thomas as an E-6 Petty Officer.

Robert received a degree in electronics and TV repair from DeVry Technical Institute. He worked part time from his home for the community repairing TVs, even going to their homes.

He was employed as a machinist and retired from Taylor Winfield after 41 years, where he served as a foreman in the machine shop for many years.

Robert enjoyed a fulfilling life during his retirement, as he loved to go boating and fishing for walleyes on Lake Erie with his wife, family and friends.

His hobbies included tinkering with his cars and his short-wave radio.

After his wife, Doris, passed away, Robert became loved by the local Panera employees who greeted him most every morning and prepared his special order of coffee and blueberry bagel with butter.

Robert was preceded in death by his parents; his wife and young son; and his brother, Leon Powell of Sandy Lake, Pa., who passed in 2008.

“Uncle Bob,” as he was known, is survived by several nieces and nephews.

There is no viewing, and Robert’s interment will be in Crown Hill Burial Park, Vienna, Ohio.