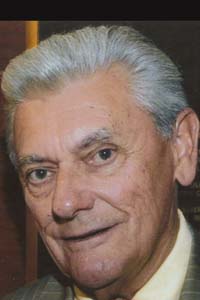 Frank was a member of SS. Peter & Paul Byzantine Catholic Church in Warren.

Frank was a 1953 graduate of Rayen High School. Upon graduation, he started his early interest in aviation by enrolling at Park College of St. Louis, where he graduated with a bachelor’s degree in aircraft mechanics in 1956.

From there, Frank’s love of aviation was continued in the U.S. Army for two years, working on military planes, then to the private sector as a mechanic at Beckett Aviation until July 1959. It was then, in August 1959, that Frank joined the Youngstown Air Reserve Station until his retirement on April 2, 1994, where he served both his community and country for 35 years.

That early passion and enthusiasm showed in Frank’s work as an Air Force Reserve Technician (ART) and Reservist, where he worked his way up the ranks to Chief Master Sergeant, overseeing all C-130 aircraft maintenance for base operations. His distinguished service earned him many recommendations and commendations along the way, as he played a role in the growth and recognition of the base under the 910th Airlift Wing.

Frank had an affinity for motorcycles, handcrafted radio control airplanes, and was an avid aviation buff (historical, World War II, modern). He was an active member of the Skyhawks and Flying Aeros Remote Control clubs, and even served as president of the Skyhawks RC club. But what Frank most enjoyed was teaching the art of flying and building RCs, especially to his son Frank. He was a big charity giver throughout his life, especially to St. Jude Children’s Research Hospital.

He is survived by two sons, Frank (Jannette) Prevec of Howland and Joseph Prevec of Clemmons, N.C.; a daughter, Marla (Judge Sam) Bluedorn of Howland; a granddaughter, Lauren Prevec of Cleveland; and a sister, Donna Prevec of Pekin, Ind.

Besides his parents, Frank was preceded in death by his loving wife, Laurina Prince Prevec, whom he married Oct. 10, 1959, and who passed away July 4, 2005; and his brother, Richard Prevec.

The family would like to thank Frank’s private caregivers. “They were extraordinary and compassionate people, and our family was grateful for their presence. Also, special thanks to Grace Hospice and Comfort Keepers who helped Frank throughout his illness.”

Frank’s last wishes were to be cremated, and a private family service will be held with his immediate family.

The family requests that, in lieu of flowers, contributions be made to Grace Hospice, 7206 Market St., Youngstown, Ohio 44512, in memory of Frank T. Prevec.

Arrangements have been entrusted to the care of the Staton-Borowski Funeral Home, 962 North Road NE, Warren, Ohio 44483, 330-394-6200. Dedicated to serving your loved ones. This obituary may be viewed and condolences sent to www.statonborowskifuneralhome .com.