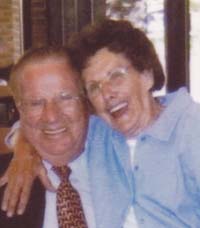 He came to Warren in 1959, and retired in 1995 from the Warren Post Office as a mail carrier after 37 years. John was a member of St. Mary Church in Warren. He enjoyed walking, riding his bike, hunting, and word search puzzles.

John was a veteran of the United States Air Force, Korean War.

“There’s a house in heaven, where two chairs sit just outside. She sits in one. The other is empty right now, but she always puts both chairs out every day. The house isn’t very big, but it always seems like it’s just big enough. That’s how she likes it. She waves to the neighbors, who are just starting their day, even though she’s been up for a while already. She walks inside, leaving the door open. There’s a house in heaven, where the coffee is always fresh. She pours a cup, and busies herself getting the table ready. She puts the kettle on, and goes through the newspaper. She sets the good parts on the table. She knows the ones he likes to read. She makes the tea, and sets the steaming cup next to the paper. There’s a house in heaven, where the door is always open. She’s sitting at the table, coffee in hand, when she hears his footsteps just outside. He steps through, and she smiles. It’s the kind of smile that lights up her eyes. He can’t help but smile back. (Teresa Stacy).”

Family and friends may visit www.peterrossiandsonfh.com to view this obituary, sign the guestbook, and send condolences to John’s family.