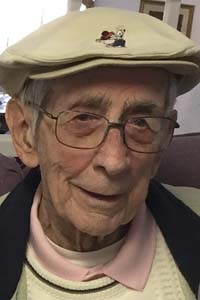 WILMINGTON, N.C. — Donald E. James Sr., 95, passed away in the evening of Wednesday, May 29, 2019, at Spring Arbor Assisted Living in Wilmington, N.C.,where he had been residing with his favorite lady, Mary Seefred James. Together they created one of the greatest love stories of all time over 82 years, with almost 75 of those years as husband and wife.

At the age of 14, he found his first and last love, Mary Seefred, that cute little blonde he spotted through a very high window as his buddies propped him up so he could see her. That’s when it all began. They attended Niles McKinley High School and graduated together in June of 1942.

After graduation, Don enlisted in the Navy and spent most of this time in Olathe, Kan. He and Mary were married in Olathe on Oct.18, 1944. They returned to Niles afterwards, where Don became the proud owner of James Dairy on the corner of Robbins Avenue and Fulton Street. He and Mary worked hard in the dairy store selling Sealtest ice cream and serving the community. Don and Mary became active members of the First Methodist Church in Niles. They soon decided it was time to start a family. Along came their son, Donald E. James Jr., followed by their daughter, Sallie. Don loved his family and working in his dairy store until the long hours made him decide to make a change. He went into the banking business at The Niles Bank Co., eventually opening and managing their three branch banks and later moving to the Dollar Bank, now Farmers Bank.

Following retirement, Don became an active golfer. He loved the game, no matter where that little white ball landed. He eventually convinced Mary to do the same. They had a close-knit golf group of other couples who really enjoyed their golf and travels together.

After a few years they decided to head to the sunny South. They built a home in Sun City of Hilton Head in Bluffton, S.C., where they enjoyed golf more frequently and traveled to visit friends and family.

In addition to his parents, Don was preceded in death by his younger sister, June Williams and her husband, Leonard Williams.

Don leaves behind the love of his life, Mary; his son, Donald E. James Jr. (Sue) of Chapin, S.C.; and daughter, Sallie Bohn (David) of Wilmington, N.C.; two grandsons, Ryan (Hadley) of New York and Nate (Lauren) of Connecticut; and a total of four great-grandsons, Brecken, Warner, Caine and Brooks. He also leaves behind niece, Lynda D’Allessandro and nephew, Jeff Williams, both of Niles. They will all miss him greatly as they rally around and support the love he left behind.

During his 95 years, Don lived to make other people happy and to hear them laugh. He loved working at James Dairy and putting smiles on faces as he served ice cream cones and milk shakes. The same was true at the bank when he could make people happy when he could secure an auto loan for them. He loved to tell jokes and make people laugh, especially children. He always said he wanted to come back in his second life as a clown — now’s his chance.

A celebration of life will be 4 p.m. Monday, June 17, at the Bridge Presbyterian Church in Leland, N.C. In lieu of flowers, contributions may be made to any charitable organization, in Don’s name, that provides for the betterment of the lives for young children that Don so dearly loved. Condolences and tributes may be sent to SallieBohn@gmail.com or donjhhi@gmail.com.