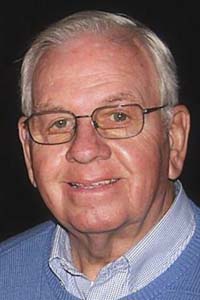 MIDDLEFIELD — Ralph Miller Lawrence died peacefully on Tuesday, March 12, 2019, at Blossom Hill in Huntsburg, at the age of 89.

He was born Dec. 2, 1929, at home in West Farmington, to Cyntha Northway Lawrence and Leland Thomas Lawrence.

He grew up during the Depression and worked hard putting himself through school at Kent State and then through The Ohio State University School of Pharmacy. After graduating, he served his country in the 4th Medical Bn., 4th Division, as a 1st Lieutenant in the U.S. Army, stationed in Germany in 1954 and 1955. He married his loving wife, Donna Lee McCarten, of Lancaster, Ohio, on Oct. 11, 1953.

In 1956, he bought David Chase’s pharmacy in Orwell and owned Lawrence Pharmacy and served Orwell for 40 years. He belonged to the Orwell United Methodist Church and was a life member of the American Legion. He enjoyed bowling, golfing, snow skiing, dancing, playing cards and watching local and Cleveland sports teams. He loved his family, The Ohio State University Buckeyes, traveling with Donna and ice cream.

Ralph was preceded in death by his parents; and siblings, Howard Lawrence, Marion Ihlenfeld and Ruth Hindman; and his son, Gregory Ralph Lawrence.

In lieu of flowers, memorial contributions may be made to The Orwell United Methodist Church and The Orwell American Legion. Envelopes will be available at the church. Condolences may be made at painefuneralhome.com