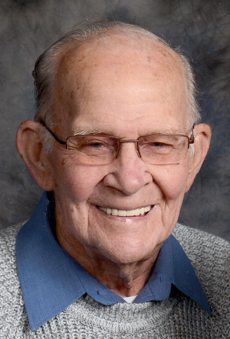 Charles was born Dec.18, 1931, in Newton Falls, the son of the late Harry and Erma McClain Moss.

Charles married Frances Emma Hall on June 12, 1954. They were blessed with 63 years of marriage and spent their retirement years in the same house they bought in Champion in 1959 to raise their family.

Charles worked 41 years for Packard Electric. After working three decades as a tow motor operator, Charles worked his final 10 years at Packard as a semi-truck driver before retiring in 1991.

He was a veteran of the U.S. Army, and was a member of the Newton Falls First Church of God and the Braceville American Legion 709.

Charles was always full of life and loved making people laugh. He made friends easily, was always telling jokes and was a great storyteller. Charles enjoyed watching NASCAR and loved going to sprint car races at Sharon Speedway and other dirt tracks throughout Ohio and Pennsylvania.

Calling hours will be 1 to 4 p.m. Sunday, Feb. 4, at the James Funeral Home, 8 E. Broad St., Newton Falls, Ohio 44444. Funeral services will be 11 a.m. Monday, Feb. 5, at the First Church of God in Newton Falls with the Rev. Gary Bryan officiating and the Rev. Arnold Edmondson assisting. Charles will be laid to rest in Champion Township Cemetery.

Please visit www.jamesfuneralhomeinc.com to view Charles’ obituary and send condolences to his family.