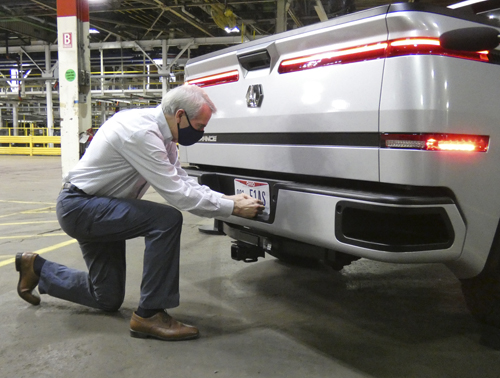 “I think it makes all the sense in the world because this vehicle (the Endurance) is something that I think fits very well with what General Motors says they want to do, which is turn into a more of an electric car company,” Portman said.

GM has intentions to have 13 battery-powered models ready for consumers in the next five years, 11 of which will be powered with battery cells made at a multibillion-dollar plant that’s under construction adjacent to the auto assembly plant.

Lordstown Motors recently debuted an Endurance prototype as work continues to retool the massive plant to build the electric truck. It plans to produce 30 beta vehicles for crash and durability testing early next year and by the end of summer 2021 start making the truck — 14,000 of which are on preorder.

Already, General Motors has aided the startup by selling the plant for a cheap $20 million, including equipment inside, and loaning Lordstown Motors millions to help acquire the 6.2 million-square-foot structure.

And Steve Burns, Lorstown Motors CEO, isn’t ruling out a possible future partnership with GM if the opportunity presents itself. Lordstown Motors already is purchasing some equipment from GM, such as airbags, for the Endurance.

“We have a great relationship with them, and we are buying a few of them, some key parts in this, so hopefully it could be a richer relationship going forward,” Burns said at the June 25 reveal of the truck.

Portman on Wednesday toured the plant and got his first up-close look at the Endurance, which is now street legal. It was the Republican senator who placed the registration sticker on the truck’s rear license plate.

“This is an electric pickup truck that already has thousands of people who want it — mostly it’s municipalities, companies that sort of thing — but I’m excited about seeing production in this plant again,” Portman said. “The last time I was here, of course, the Chevy Cruze was here. The plant was full, it was humming, and it was really disappointing General Motors chose to pull out. I pushed hard to get them to put another vehicle here, (but) they decided not to do that. I was very disappointed, but I’m also glad that now we see a vehicle being produced here.”

GM shuttered the plant in March 2019 as it pivots focus to trucks, SUVs and electric vehicles. There was hope of convincing the automaker to assign a new vehicle there that hinged on contract negotiations between the company and the United Auto Workers union, but that did not come to pass, sealing the plant’s fate and ending 54 years of GM automaking in Lordstown.

Portman was among several lawmakers who tried to convince GM to walk back its decision. GM, he said, wasn’t interested in federal regulatory, tax and training relief that would have gone to GM keeping the facility.

“I think at the federal level we did a lot of things that were helpful, but still from their point of view, small cars weren’t selling. So no matter how many incentives, they felt they could not sell the Cruze and make it profitable,” Portman said.

Now though, production of the Endurance “underscores the hope and excitement” surrounding Lordstown Motors’ investment, and Portman said he believes the company can be a “significant economic engine” in the Mahoning Valley.

Portman on his swing through Trumbull and Mahoning counties also was to stop at the Second Harvest Food Bank of the Mahoning Valley in Youngstown to discuss the Coronavirus Aid, Relief, and Economic Security (CARES) and Families First Coronavirus Response acts.