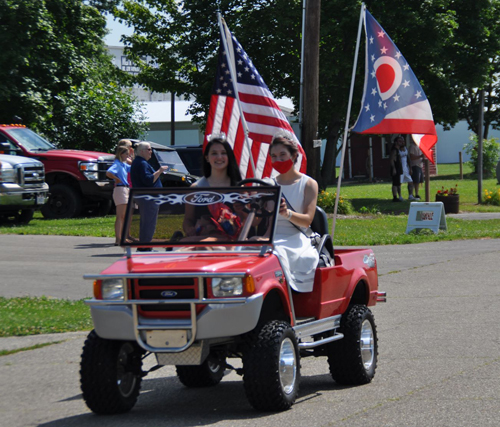 Staff photo / Ashley Fox 2019 Junior Fair Queen Callae Moody, 19, of Orwell, leads the way of a procession through the Trumbull County Fairgrounds on Saturday, while this year’s Queen Amanda McCauley, 17, sits next to her.

BAZETTA — Before the gates opened to the public to get a taste of fair food on the July 4 holiday, a group of 4-H students made their way around the Trumbull County fairgrounds as onlookers applauded.

Seniors and last-year members of the county’s 4-H program were recognized Saturday after the Trumbull County Fair was canceled.

“With no fair, we had to do something to celebrate for them,” said Bud Rodgers, fair board president.

Participating in the procession was 19-year-old Madeleine Morton of Greene. Looking back on the year that was cut short in March when state mandates closed much of the economy, she said she learned not to take things for granted.

“Treasure everything because you don’t know if it’ll be the last time,” Morton said.

That sentiment was echoed by Callae Moody, 19, of Orwell, who was last year’s Junior Fair queen.

Calling this year “a different experience” not only for 4-H members but also herself as a freshman at Baldwin Wallace University, Moody said that a valuable lesson was learned.

“Never let anything hold you back,” she said.

The unforeseen challenges this year gave members some opportunities to think creatively.

“It really showed the kids how to grow as a 4-H kid, and 4-H isn’t just a way to show animals, but how to market the animals outside of their projects,” Moody said.

For Becky Dyson, adviser of Rogue Riders, a horse 4-H club, the parade was a sendoff for seniors who missed things they have looked forward to since they were kids, including shows and in-person meetings.

“These guys usually have a two- or three-month show horse season,” she said, noting that the pandemic and closures made the season impossible.

The students will have something to look forward to next month, she said, as there will be a few shows scheduled.

A lunch was held after the procession, which was sponsored by County Commissioner Dan Polivka and the fair board.