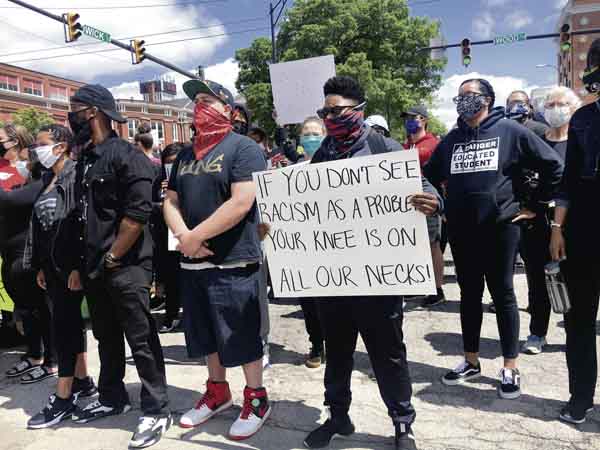 Lines of demonstrators gather at the intersection of Wick Avenue and Wood Street just north of downtown Youngstown for a peaceful rally Sunday morning protesting the death of George Floyd last week in Minneapolis. Later in the day after a series of minor vandalism and confrontations with police, Mayor Jamael Tito Brown issued a curfew for the entire city. By 9:30 p.m., authorities had cleared the streets, with a total of 13 arrests made Sunday. A similar peaceful protest begins at 6 p.m. today at Perkins Park in Warren. Correspindent photo / Sean Barron

WARREN — A local group has organized a “We Matter Protest” to be held 6 p.m. today at Perkins Park in Warren, which follows a day after the city of Youngstown saw a curfew imposed when several protests and marches erupted into minor vandalism and the arrest of 13 people.

Ty’onna Powell of Warren, a member of The We Matter movement, said she has organized the Warren event, which has an objective to be a peaceful protest that observes the practice of social distancing.

Among the speakers will be Elder Julian Walker who will lead in a prayerful moment where all participants will take a knee.

“Hopefully we can have people bring candles and balloons that will demonstrate a peaceful protest in light of everything that is going on,” said Powell, who is a lifelong Warren resident and 2018 graduate of Rivergate School. She said she wants the group to take a lap of the park and then congregate peacefully in the downtown area.

“This isn’t a black-versus-white or us-versus-the-police matter,” she said. “We want to demonstrate there is still love in this city, and if this (rally) motivates someone into another peaceful action, then my job is done.”

The group will meet in Perkins Park near the hill to remember those who have been lost to police brutality.

Organizers said plans are for participants, wearing black and shirts with #WeMatter to walk around the park track singing the black national anthem while holding signs and posters, and then either light a candle or release a balloon while taking a knee.

Pastor Todd Johnson of Second Baptist Church in Warren said the protest will be to remember any victim.

“This will be a peaceful walk around the park,” he said.

Youngstown police Chief Robin Lees said his department had been downtown throughout the day but around dusk when the curfew began, they moved into the Federal Street area to disperse the crowd.

“We confronted what was left of the core walking group on Federal Street, and they were not dispersing, so we started making arrests.”

The chief said when the crowd realized they were going to be arrested, some fled toward Commerce Street, where a large group of Ohio State Highway Patrol officers assisted in controlling the group.

“We called in basically all of our law enforcement partners and assembled a large contingent of police and pushed into the downtown and decided enough was enough,” Lees said. “We spent the entire day trying to avoid a confrontation, but we discussed it with the mayor and he issued a proclamation for a curfew and went out and enforced it.”

Brown’s curfew order, which included the closing of all businesses and all city streets to motor vehicles and pedestrians except for emergency vehicles, shall remain in effect for 12 hours.

Mahoning County Sheriff Jerry Greene reported 12 arrests Sunday night — 10 for violating curfew and two for assault of a police officer. No names of arrestees were given.

Windows were broken at Choffin Career and Technical Center and the United Way office, while two major roadways were blocked at various times Sunday afternoon by protesters.

“Whatever is transpiring now (in Youngstown), is not in any way affiliated with the beautiful, yet forceful collective call for justice that occurred earlier. There is a way to share your views without violence. However, just because one is non-violent, doesn’t mean they are passive: We must speak truth to power while power is before us, even when that means calling out a congressman,” Johnson posted on his Facebook page on Sunday.

Event organizers said they want to bring unity to the city to remember the victims.

Warren Mayor Doug Franklin said he and other city officials have followed the plans for the protest in Warren on social media.

“There has been no coordination with the city for this. We have been getting a lot of the information from social media,” he said.

Franklin said he has no problem with peaceful protests, but is concerned with what has happened in other communities, including Youngstown on Sunday.

“I am sure there are many who will be there for a peaceful protest. I am more concerned with people from out of the area who may come here with bad intent to try to tear the city up like there has been in other cities,” Franklin said.

He said he wants to speak to the organizers before the event is held.

Trumbull County Sheriff Chief Deputy Joseph Dragovich said sheriff’s deputies will be at the event today to help provide security. Dragovich said he has not spoken to anyone connected with the planned protest and wishes the office had been able to see what the event organizers are planning.

Dragovich said he was not aware of any protests or problems in Trumbull County on Sunday, but noted that stores in Liberty, such as Walmart, had closed early as a precaution in case of possible threat of vandalism or looting.

“We have not heard anything locally but there is concerns of others coming in to cause issues like they have in larger cities.” he said.

As of late Sunday, there were no reports of problems in Trumbull County.