One hurt as car hits trailer on South Street in Warren 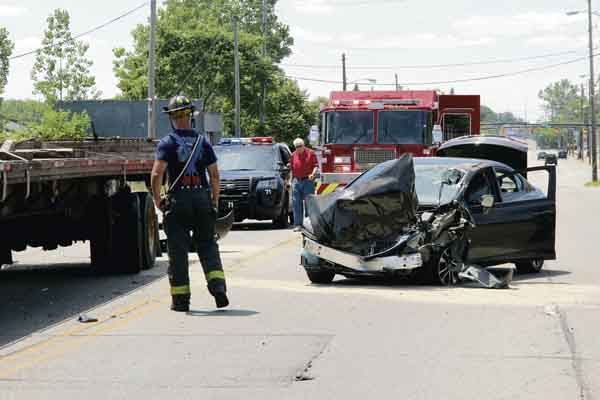 John Brocious, manager of ECON Steel, right, surveys the damage to a company trailer after a sedan collided with it around 2 p.m. Monday in front of Taco Bell on South Street in Warren, as a Warren city firefighter looks on. Both westbound lanes were closed for several hours to clear the scene. Staff photo / Allie Vugrincic

WARREN — One man was taken to Trumbull Regional Medical Center after a car collided with the trailer of a semi-tractor trailer in the 400 block of South Street in Warren around 2 p.m. Monday.

The driver of the tractor-trailer, Eric Rudge of Cortland, said he was about to make a left turn onto Elm Road when a 2013 Honda Civic went left of center and crashed into the trailer.

Rudge said the driver of the sedan got out of the car, walked toward Taco Bell, and collapsed.

Warren firefighters were called to the scene when the car began to smoke, according to Trumbull County 911 call logs. They neutralized fluids leaking from the car.

Rudge was heading to an ECON Steel warehouse on North River Road and driving a company truck, which had to be towed from the scene because an axle was bent and two tires went flat on the trailer.

The Honda was totaled, with the front of the car smashed and the windshield punctured.

Both westbound lanes of South Street were closed for a few hours while crews worked to clear the scene.