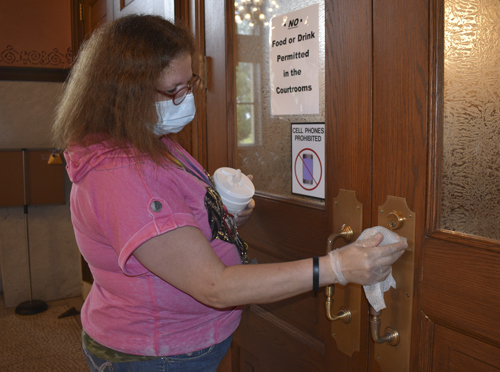 The county governments in Trumbull and Mahoning each received about $3.5 million last week as their share of the federal funding Congress allocated to them in March through the CARES Act.

Americans are more familiar with the $1,200 payments for adults the Coronavirus Aid, Relief, and Economic Security Act provided, but it also allotted $150 billion to help state and local governments.

Mahoning County likewise received $3.7 million, and the local governments within the county are dividing another $3.7 million.

The money is being provided to reimburse local governments for “necessary expenditures incurred” because of the coronavirus emergency, according to the U.S. Department of Treasury. Expenses incurred from March 1 to the end of the year qualify for reimbursement.

Both county governments are putting some of these funds toward additional sanitizing and cleaning operations to protect the public from contracting the coronavirus.

Trumbull County, in sanitizing county buildings, has decided to keep the work mostly in-house to keep down costs.

Al DeVengencie, head of the Trumbull County building maintenance department, said he did bring in outside companies about a month ago, but decided to avoid that in the future.

He put a custodian on a day shift to sanitize high-touch surfaces in high-traffic buildings, such as the county courthouse and county administration building, and is trying to purchase a disinfectant “fogger.”

Custodial staff worker Christina Loney said she also disinfects at the Family Court building on Main Avenue Southwest and the Stone Building on Courthouse Square, where the probation department works.

DeVengencie and Anna DeAscentis, who is a grant writer in addition to her duties as deputy director of the Mahoning County Emergency Management Agency, both commented that when the coronavirus hit, it was unlike anything they had seen in their careers and required them to evaluate various options for responding to the crisis.

“This COVID thing, it kind of jumped on us. We are taking it on the fly,” DeVengencie said.

“It’s such a fast pace,” DeAscentis said of trying to acquire things like hand sanitizer and personal protective equipment at the same time medical facilities are needing it badly.

Mahoning County is spending some of the money to carry out additional sanitizing and cleaning operations in buildings such as the county courthouse, county administration building on Boardman Street and Oakhill Renaissance Place on Oak Hill Avenue.

Another example is the devices being introduced into Mahoning County courtrooms to allow hearings in criminal and civil cases to resume. Recently, the judges of Mahoning County Common Pleas Court announced they would resume trials next month.

One device is a clear plastic barrier attached to a metal or plastic frame. Many of them have been rolled into courtrooms. They will protect jurors and others during jury trials, though some have been used for other types of hearings for a couple of weeks.

Similar barriers have been in use for more than a month in other office areas, such as the front counter at the clerk of courts office.

The Mahoning County commissioners also hired several cleaning companies to carry out sanitizing and cleaning activities that go a few steps beyond what the county’s maintenance staff normally does.

Zach Cuculich, a manager in the Mahoning County facilities department, said maintenance workers have done extra cleaning in facilities where someone has been sick with the coronavirus or suspected of having it, in addition cleaning high-touch surfaces such as door handles multiple times per day in the three biggest buildings and others.

“It seems to be working,” he said. “We haven’t had any big problems.”

The county also has hired several companies such as ServPro and ServiceMaster to do a more thorough cleaning on nights and weekends when no one is inside the buildings. Those cleanings take place weekly or every other weekend in the three big buildings.

Cuculich said he would like county employees to do that work, but the county does not have the manpower or the tools needed.

The cost to pay outside companies is adding up.

On May 21, the commissioners approved paying $15,705 to ServPro and ServiceMaster for sanitizing the Oakhill facility and courthouse on five days in early May.

Commissioners’ meeting agendas available online indicate the cost to outside vendors for sanitizing work in April, May and June have totaled $54,756.32.

DeAscentis said she expects the county’s additional virus-related sanitization costs to be reimbursable through the county’s CARES Act funding.

Costs incurred by the Mahoning County Emergency Management Agency will go through the federal EMA and will be covered at 75 percent, she said, although money from the CARES Act may cover the county’s 25 percent, she said.

Among the Mahoning EMA costs so far have been about $130,000 the commissioners spent to buy personal protective equipment that EMA distributed to hospitals, nursing homes and other facilities fighting the virus and around $350,000 for EMA manpower and equipment.