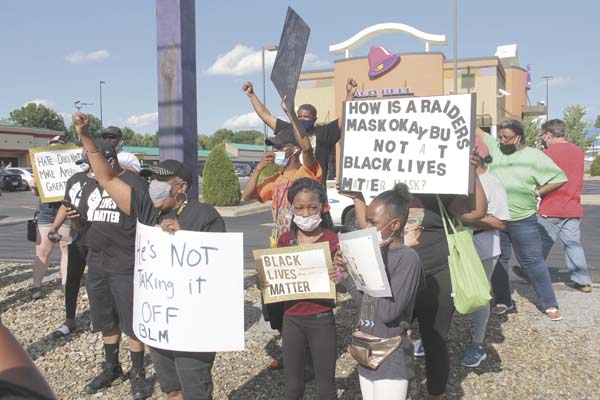 Protesters gather outside the Taco Bell on Belmont Ave. in Liberty after earlier this week eight-year employee and night manager Denzel Skinner was fired for wearing a mask that read "black lives matter."

LIBERTY — On Friday evening, a group shouting, “Black Lives Matter! I won’t take it off,” took to the street outside Taco Bell at 3551 Belmont Ave., in protest after an eight-year employee was fired earlier this week for refusing to take off his Black Lives Matter mask.

Denzel Skinner, a night manager at the fast-food restaurant, was fired Monday by his general manager, Skinner told a group of about 50 people gathered in his support.

He said there wasn’t a rule in the new COVID-19 policy that said a Black Lives Matter mask couldn’t be worn. The policy just said the mask had to be clean.

“If it takes me losing my job where I’ve been for eight years to fight for change, then that’s what it takes,” Skinner said.

The peaceful group was met with a chorus of supportive honks from passing cars.

Ra’Cole Talton, who spoke during the gathering, encouraged everyone there to get out and vote to make change happen.

“Without voting, we have no voice,” Talton said. She said everyone should take the opportunity for change and start “right on your block.”

“We had to fight for human rights before we got civil or equal rights — if that’s what we got,” Onifade Carter, an organizer of the rally, said of the black community.

He challenged those in attendance to take voting one step further and focus on local elections that can bring real change to communities.

He also said he wanted to make enough noise that the Liberty Taco Bell, which was closed during the rally, wouldn’t get any business even if it was open.

There was not an immediate response from a request for comment from Taco Bell’s corporate office.

Skinner said although he did not organize the rally, he was appreciative of the support he received from the community.

He said his message for people remains, “All lives can’t matter until black lives matter.”