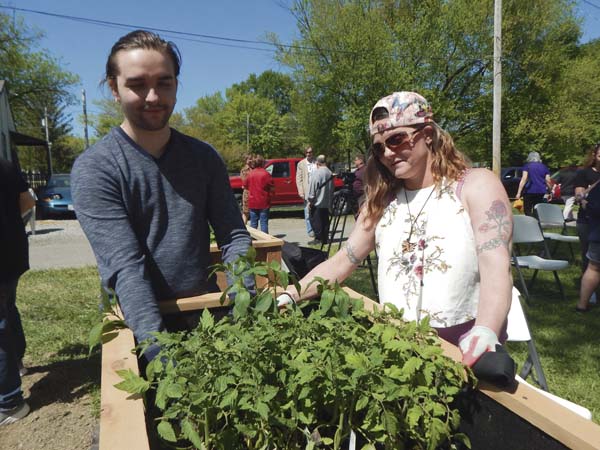 Christopher Laureano, left, and Christine Meadows show one of the raised garden beds at the Newton Falls Community Garden

NEWTON FALLS — A newly created community garden for public use recently was dedicated to the local American Legion Post 236.

A dedication ceremony was held Thursday by village officials at the site of the garden off Trumbull Court on a vacant village lot.

The garden includes areas for the public to plant vegetables and flowers, as well as raised planting beds for those unable to kneel or bend over.

Mayor Ken Kline said the garden will be an opportunity for friendships to grow as people from the community will be able to work side by side.

He said while he and others may not have “green thumbs” for gardening there will be others at the garden who can provide assistance to those wanting to plant.

Kline said there will be people who can prepare the soil and others to plant and water.

He said there are plans for other community gardens in the village.

Village Manager David Lynch said the idea of a garden in a residential neighborhood goes back to World War I, and various posters from that era were placed around the garden.

“Throughout history we have relied on gardens as a way for people to come together as a community and support ourselves. Gardening is a sign of hope just as farmers plant their fields,” Lynch said.

He said the garden was dedicated to the American Legion for those who have dedicated and given their lives for others to be free.

American Legion Commander Rick Nelson said the local American Legion, established in 1923, is the oldest veterans organization in the community. He said the post has some veterans who are in their 90s.

He said the legion donated $58,000 last year for different community services and scholarships.

Waddell said the lot that he owned was given to the village for public use for the garden.

“I thought it was a good idea. I really can see this being successful. I would like to see more gardens in town,” he said.

Bishop and Meadows will oversee the operation of the garden. Bishop, who said she grew up on a farm, said she will teach local youth, including her own children, about farming.

“I grew up doing this kind of thing. I believe the younger generation can learn about gardening and how our food is prepared,” she said.