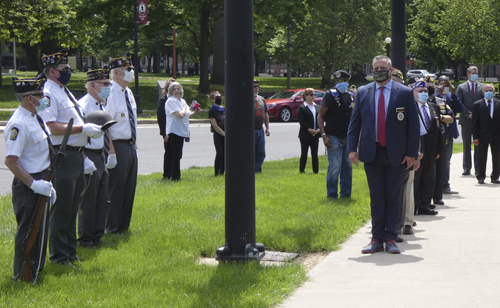 Staff photo / David Skolnick Led by Herman Breuer, director of Trumbull County Veterans Services, a group lines up, at right, to begin the Memorial Day service Monday in Warren. At left, are members of the Cortland American Legion, which served as the honor guard for the ceremony. Honor guard members are, from left, Roger H. Gardner, David L. Moore, Earl Parthemer and Jim Young.

WARREN — Usually veterans and others from the community pack the Warren Community Amphitheatre in Perkins Park on Memorial Day to pay tribute to those who died protecting our nation’s freedom.

While the crowd was smaller and the event scaled back Monday because of the COVID-19 pandemic, those at the Trumbull County Veterans Memorial said fallen soldiers always will be honored — and nothing will stop them from continuing to do so.

“It’s the most important day to remember those who laid down their lives,” said Herman Breuer, director of Trumbull County Veterans Services and a veteran who served in Iraq. “I’m disappointed that we had to have a smaller event, but it doesn’t stop us from honoring those who made the ultimate sacrifice. They will always be remembered, and we will always spend this day honoring them.”

The annual observance in Warren usually includes a wreath cast into the Mahoning River, followed by a service at the amphitheater and a parade.

On Monday, wreaths were placed at each of the monuments at the memorial honoring those from wars after a short walk. Motorists drove by the site to pay tribute.

Trumbull County Commissioner Frank Fuda, who attended the morning ceremony, said, “I miss coming for a full service. But because of the circumstances, changes had to be made. It’s still a way for us to honor our veterans who gave their lives for us and our freedom.”

Allen Briggs of Leavittsburg, a Marine who served in Vietnam, said he was proud to participate in the Memorial Day observance in Warren.

“This is a nice ceremony and a way to honor those who were killed in wars,” he said. “It’s the greatest honor to pay tribute to those who sacrificed their lives for our freedom.”

U.S. Rep. Tim Ryan, D-Howland, also in attendance, praised Breuer for organizing an event to honor those who died in wars.

“We were able to capture the importance of the day,” he said. “During this pandemic, it’s even more important to have the ceremony. Americans are grateful for a lot of things, especially the men and women who lost their lives fighting for our freedom. There’s a lot more appreciation for life in general today.”

Other small ceremonies with limited public participation were held throughout the Mahoning Valley, and all previously scheduled parades were canceled.

In Austintown, American Legion Post 301 held a brief ceremony in Veterans Park off Mahoning Avenue, using the time to emphasize the importance of remembering those who gave the ultimate sacrifice for their country.

“To this day, many Americans still do not understand the true meaning of Memorial Day,” said Post 301 Commander Dave Ewing during the ceremony, which also was broadcast by Austintown news outlet Falcon Media. “Memorial Day is a national holiday set aside to honor military service members who died fighting in a war.”

He stressed the importance of honoring the fallen, even amid the COVID-19 pandemic.

“It saddens my heart that our nation would come to a time where we are told we cannot honor these brave men and women, who fought and sacrificed their life for the very freedoms of the ones who are telling us we cannot honor them today,” Ewing said.

Post 301 also made an appearance at a noon ceremony hosted by Austintown Schools band parents. Student and alumni band members came together to play taps, and Post 301 provided another 21-gun salute.