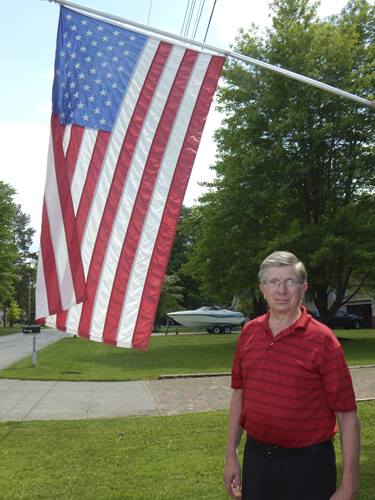 Staff photo / Bob Coupland Bazetta resident Al Crouse has played taps every night for the past three years at Courthouse Square in Warren as a tribute to armed and safety forces.

“I play taps every night so people can hear it at Courthouse Square (in downtown Warren),” he said.

Crouse, who has loved music since elementary school, said four years ago he saw a news flash on his cellphone about a man in Tacoma, Wash., who plays taps off the deck of his home every evening. His neighbors walk out onto their own decks and stand at attention.

A Warren City Schools custodian for the past 10 years, Crouse said he works at the administration building, which neighbors Courthouse Square — and Veterans’ Park.

When he worked the 3 to 11 p.m. shift, he played at sundown from a speaker from a third-floor window. The coronavirus outbreak changed his work time to 8 a.m. to 5 p.m., so he often plays taps at 5 p.m. now.

“There are people who regularly walk Courthouse Square at sundown waiting for me to play taps. There are some people who live nearby who open their windows in the nearby buildings. I look every day to see what time sundown is and then play the music then,” he said.

He has been playing taps for the past three years.

“People who know there will be music will point to a window at the school. If I am on the front porch of the school, they can see me there.

“The tech staff helped me get the speaker set up in such a way to reach the park. I know people at the nearby winery in Warren say they can hear it,” Crouse said.

On Memorial Day, Crouse added his music to CBS News’ “On the Road” correspondent Steve Hartman’s “Taps Across America.” Hartman, who first filed the story on the Tacoma trumpet player, and the player himself invited every trumpet and bugle player to stand on their front porch or drive and play taps at 3 p.m. local time that Monday in honor of fallen servicemen and women.

Crouse said he took part because his late father, Charles, and brother, Robert, both served. His father was a World War II veteran under Gen. George Patton. Crouse said his grandfathers and some uncles also served in the military.

“When I knew this was something to honor veterans, I knew I had to do this,” he said.

Crouse said he always has enjoyed music, especially from the 1950s to ’70s, and he and his wife, Brenda, attend many outdoor concerts at Packard Music Hall and other locations.

“I listen to all kinds of music when I am working and always enjoyed patriotic music,” he said.

Growing up, Crouse attended summer camps with Boy Scouts of America. He said he remembers “The Star-Spangled Banner” being played every morning and taps played at night.

“I grew up with that. When I was on the weekend Boy Scout camping, I remember always hearing these songs,” he said.

“I have always liked music and had an interest. I played the flute in grade school and took piano lessons. I can play taps on the piano. I always remembered watching the high school band, so my interest in music was everywhere,” Crouse said.

He said his favorite artists include Neil Diamond — whom he heard perform two months before the singer retired — Glen Campbell, Barbra Streisand, Barry Manilow, Dean Martin and Frank Sinatra. He also likes the country music from the ’70s.

“Every night I can turn music on on my phone and hear it through my hearing aide,” he said.

In addition to his love of music, Crouse collects matchbooks. Some of his collection is on display at the historic John Stark Edwards House in downtown Warren. The matchbooks come from businesses in Warren and throughout Trumbull County, as well as from political candidates and officeholders, special events and others.

At one time, the collection numbered 10,000 matchbooks, he said.

“I made a display 20 years ago of matchbooks from the city of Warren and were at one time at city hall before being moved to the John Stark Edwards House. The display is three large panels with more than 200 matchbooks on them of the many storefronts at Courthouse Square,” he said. “There is one panel of elected officials.”

He gave the collection to Meghan Reed, director of the Warren Trumbull County Historical Society, who oversees the John Stark Edwards House.

The Warren native who went to Howland High School has lived in Bazetta for 30 years in the Lakeshore Drive neighborhood.

“This neighborhood is the best-kept secret on the lake. Everyone here watches out for everyone else. We were warmly welcomed to the neighborhood and love it here,” he said of the neighborhood of two streets on the west side of Mosquito Lake.

His sister-in-law, Darlene Mink Crouse, a Realtor, was the one who helped them find the house, he said.

He and his wife also took a new step in their lives, recently welcoming their first grandchild, from their daughter who lives in Canton.