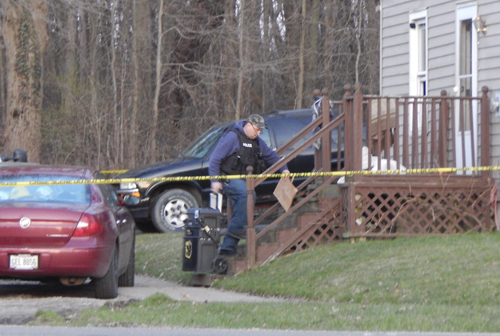 Staff photo / Bob Coupland A Warren police officer prepares to go in the side door of a house at 2405 Central Parkway SE for a report Sunday afternoon of a man being shot inside the house.

WARREN — A Warren man was in surgery Sunday night with a gunshot wound to the chest after a shooting inside a house near the intersection of Central Parkway Avenue SE and Wick Street SE, according to police reports.

The victim was listed as a 30-year-old resident of West Avenue NW, though other reports indicated he now lives at the Central Parkway home. Officials did not give his condition Sunday night, only that he had been taken into surgery at Trumbull Regional Medical Center.

Police were dispatched at 4:45 p.m. to 2405 Central Parkway SE, at the intersection of Wick Avenue, after a neighbor on Wick reported hearing three to four shots, then seeing his neighbor exit the house with a chest wound.

A 911 report indicates two other men — one wearing a red bandanna mask and the other a black / blue mask, and both with skull caps — ran outside the house, jumped into a blue Chevrolet Cobalt with temporary tags and headed toward U.S. Route 422. One report stated the men had the victim’s handgun.

Police checked the area for the two men, including searching an apartment complex and a wooded area off Ridge Road, where one person was seen getting into a vehicle. A police dog aided in the search.

No suspects were in custody as of Sunday night.

Police were seen going in and out of the one-story home at 2405 Central Parkway SE. The property had crime-scene tape roping off the entire yard, part of a neighboring yard, and the driveway where four vehicles were parked.

Two police officers at the scene took equipment into the house.

A woman who stopped in a vehicle at the property was escorted by a police officer to a neighbor’s house across the street, where she came out of the home carrying a small puppy, which she put in her car and left. Another man walked over to speak to police and left the scene visibly upset.

A resident, who declined to give her name, walked to the intersection to see what had happened and said she did not know who lived at the house and did not hear any shooting noises.

Police did not release any statements on the investigation Sunday night.