Staying safe on the road or trail 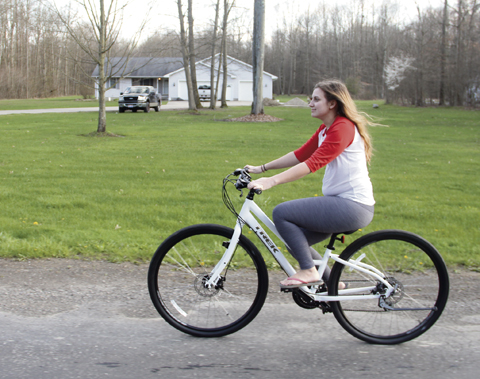 With warmer weather on the horizon and the state stay-at-home order still in effect, many people have been taking the opportunity to break out their bicycles or their walking shoes to get some safe fresh air and exercise.

Part of the Western Reserve Greenway bike trail runs through Champion, and the popular Sunside Trailhead is located in the township along state Route 305.

White said pedestrians walking on roads without sidewalks are expected to walk on the left side of the road, facing traffic, while bicyclists should ride on the right and follow normal rules of traffic. Bicycles can be cited for traffic violations just like motor vehicles, according to the Ohio Revised Code.

On the bike trail, pedestrians should stay to the right.

“On the bike trail and on the streets, follow the same rules and regulations as motor vehicles,” White said of bicycles. “Stay as far to the right as possible, obey all traffic signs, and wear helmets and safety gear when possible.”

White said cyclists also should use turn signals, just like cars. Bicycle turn signals are done with the left hand. An outstretched arm indicates a left turn, while an arm bent 90 degrees at the elbow indicates a right turn. A hand down with the palm facing back is a bicyclist’s way of telling a car or fellow cyclist she or he is about to stop.

John Terbovich, an intervention specialist at Lakeview Middle School in Cortland and an avid bicyclist, usually leads participating students and faculty in a “bike to school day” in May, which is bicycle safety month. He also teaches elementary students about bike safety and how to properly maintain bicycles.

This year, he will be showing students how to maintain their bicycles in a special Zoom video chat class from his garage at home.

Terbovich said he recommends that the kids — and anyone who is pulling a bicycle out for the first time in a while — make sure tire pressure is up to the minimum requirement, the brakes are working properly, gears are functioning and the seat is adjusted to the right height.

Terbovich said one of the most important components of bicycle safety is being visible to cars.

“Being visible is vitally important these days, with all the people and their distracted driving,” Terbovich said.

Terbovich said bicyclists on roadways should be aware of cars coming up behind them. Bicycles have the same rights on the road as cars — they can enter a turn lane to make a left, for example — but drivers aren’t always aware of that.

He said it’s also important for bicyclists to maintain speed when a car is passing; slowing down can skew motorists’ judgment of bicyclists’ speed.

“Don’t slow down and don’t get nervous when cars come,” Terbovich said. “You’ve got to know what kind of road you’re riding on.”

Terbovich, who puts “a couple thousand miles” on his bicycle every year, said he spends a lot of time riding on the Western Reserve Greenway Trail and country roads in northern Trumbull County and Ashtabula County, but he is also comfortable riding on busier roads. “It comes with experience and riding with traffic, and riding with people coming up behind you,” Terbovich said.

Terbovich said he often spends time helping other bicyclists fix their bikes while on the trail. He recommends bicyclists carry repair tools, such as a spare tube for tires and an inflation device. Bicyclists also should always carry a cellphone in case they get stuck.

At the Champion Sunside Trailhead and the Niles Trailhead, bike stands have standard bicycle tools attached, as well as pumps for inflating tires, according to Terbovich. The pumps were purchased in memory of Champion and Lakeview teacher and bicycle enthusiast Bill Thorne.

The rack and tools, made by Columbiana County Career and Technical Center, were put in place by Youngstown-based bicycle club Out-Spokin’ Wheelman in 2017, according to a plaque on the stand.

The club has more than 300 members and has been active for more than 30 years, according to its website. Members lead rides in Trumbull and Mahoning counties at varying speeds and distances for every skill level. The club’s monthly meetings, held on the second Wednesday, currently are being held by Zoom video chat.

The club rides around Mosquito Lake and Mill Creek Park, and on the Western Reserve Greenway trail, wich spans 43 miles through Trumbull and Ashtabula counties. The finished trail will run about 100 miles from Lake Erie in Ashtabula to the Ohio River in Columbiana County once completed — so far, 75 miles are complete.

Trumbull County is in the process of connecting the Warren portion of the trail to the Niles Greenway trail with about 3.5 miles of concrete path traveling over two railroad bridges and new culverts. Public comment is currently being accepted for the project, which is expected to happen in late 2021 or early 2022.

Trail etiquette on the Mill Creek Bikeway includes a speed limit of 15 miles per hour, staying to the right unless passing, leashing all pets and stopping at all intersections with roadways, according to Mill Creek MetroParks website. Bicyclists also must yield to other trail users. The same etiquette is expected on most trails.

Trails are open, though bicyclists and pedestrians are asked to maintain social distancing.

“It’s great. Get outside. Get some fresh air. It takes your mind of everything that’s going on,” White said. “And stay safe!”