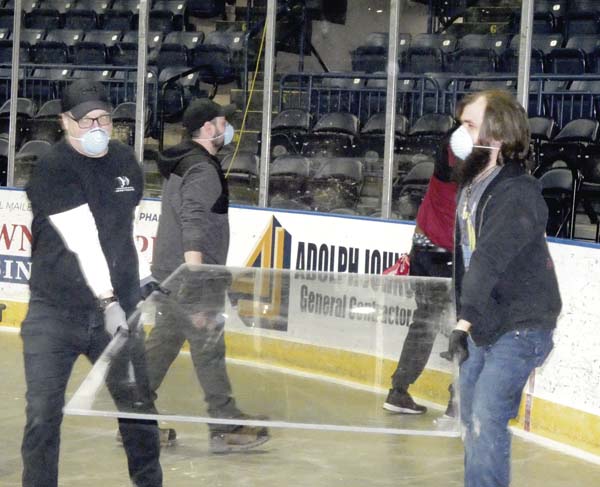 YOUNGSTOWN — While numerous local, state and federal officials toured the Covelli Centre a couple of times, it wasn’t until Gov. Mike DeWine announced that the downtown facility is one of the state’s six COVID-19 hospital overflow spaces that the arena got official confirmation of the designation.

“We didn’t know for sure until we heard the governor say it” during his Monday afternoon news conference, said Jordan Ryan, the center’s executive director. “We felt it was going to happen, and we were ready for it.”

A little over a week ago, two Mercy Health officials did an initial tour of the center, Ryan said.

Then last Thursday, officials with Mercy Health, the Ohio National Guard, the U.S. Army Corps of Engineers, Youngstown Fire Department and Mahoning County Emergency Management Agency came in and did an extensive review of the facility.

Right after getting the word that Covelli was chosen, the center brought back five members of its operations staff Tuesday from furlough, and they got to work dismantling sections of the facility, Ryan said.

“We’re prepping our facility for Mercy Health to come in and take over,” he said. “They’ll have beds and equipment on the (arena’s) floor, the concourse area and our backspace area.”

The workers spent much of Tuesday tearing down the Plexiglas and dasherboards that are used during Youngstown Phantoms hockey games as well as removing the first three rows of retractable seating from the arena.

The ice was removed March 19, the day after the Phantoms season was officially canceled, Ryan said.

Mercy Health officials are expected in the next few days to start transforming the downtown venue known for concerts and other shows into an overflow hospital space with the ability to care for about 250 patients.

The patients will have either tested positive for COVID-19 and require moderate acute care or are recovering from the virus and are in need of additional care.

The work to turn the center into a field hospital should take about two weeks. The Ohio National Guard and Army Corps of Engineers will build and then tear down the hospital with Mercy Health taking care of patients.

“It’s insane what’s going on,” Ryan said. “We hope it doesn’t last long for obvious reasons. We were hoping it wouldn’t come to this, but we’re happy to help the community. We’re all in this together.”

Ryan said it was an honor for the center to be chosen as one of six locations in the state designated as hospital overflow space.

The other locations are in Lucas, Cuyahoga, Montgomery, Hamilton and Franklin counties.

The center was chosen over other Mahoning Valley locations — including the closed Northside Medical Center and Youngstown State University — because of the ease of getting patients in and out of the arena, the amount of parking it has, its loading docks and its level of fire suppression equipment, said Dr. John Luellen, CEO of Mercy Health-Youngstown.

“We continue, from a hospital standpoint, to expand our capabilities in the hospital — opening up more units as intensive care units, opening up more nontraditional areas within the hospitals to take care of more patients, such as the post-anesthesia unit, etc.,” said Dr. James Kravec, chief clinical officer for Mercy Health’s Youngstown market.

Last weekend, Mercy Health wrote up a list of supplies that will be needed at the Covelli Center and continues to work with the National Guard to order supplies and Mercy Health buying its own supplies, Kravec said.

“Now it’s a matter of … working on our staffing as far as which of the physicians … will be covering that, how many and working through that in the next couple of weeks.

“I don’t see this being used in the next couple of weeks,” he said. “We’re preparing for the surge of patients. Hopefully, it doesn’t come or doesn’t come as high, but we’re prepared.”

Ryan said he looks forward to the day that the center can return to entertaining people.

“The coronavirus pandemic has hit the country,” he said. “I don’t think there’s an entity it hasn’t impacted in the United States, including the entertainment business.”