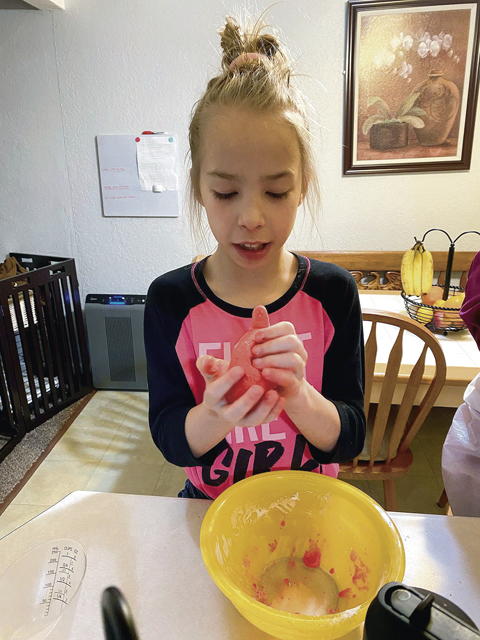 Whether trying to help with their schoolwork using the newest technology, getting them to stay in front of the computer to finish assignments or just having enough food in the house because they are home all day, grandparents raising grandchildren are facing more challenges than ever during this coronavirus outbreak.

Mesopotamia resident Sharon Grover is one of the founding members of a grassroots support group called Grand Addition, an organization run by and for grandparents who are raising grandchildren because of the birth parents’ addictions, death or other reason.

She said it is already difficult for many grandparents raising grandchildren, but the coronavirus outbreak has changed the situation: The grandchildren are home all day and doing school learning at home on the computer.

Grover said for a period, she and her husband Steve raised their two grandchildren who were in their custody.

“My grandchildren were younger and went to Bloomfield-Mespo schools and if there was ever a question of the schoolwork I knew I could call or email the teacher. I tell grandparents today if they ever have a question about their grandchildren’s schoolwork to contact the teacher,” Grover said.

Grover said now that teachers are forced to do schooling online, grandparents have no choice but to do more to assist their grandchildren with the work.

“They are, in a way, homeschooling their grandchildren. It has got to be tough,” she said.

Grover said what she does feel are positives is the grandchildren know how to use the computers more than many grandparents. Also, she said, Gov. Mike DeWine has done away with any state testing for this school year,which will help students, teachers and grandparents.

“That is a big load off many people’s minds,” she said.

Grover said what is more challenging, especially for younger grandchildren, is getting them disciplined to sit down at a computer and do the school assignments, disciplining the children to have a set time and schedule do their school work, and to have them be responsible to help at home with cleaning their rooms and doing chores.

She said if the grandparents do not understand the subject, they should contact the teacher.

Grover said grandparents were given breaks when the grandchildren were in school for the day, but not now.

“I have heard from some grandparents the granchildren are always eating. They are home all day and eating more food and it is costing them more money,” she said.

Grover said when school is in session, children eat lunch, and for some, breakfast, at school.

She said for schools that provide food to children, it is difficult for grandparents pick up meals if they do not have transportation.

It’s not just grandparents but even great-grandparents who have their younger family members in their homes.

When able to begin meeting again, Grand Addition meets 6 p.m. the first and third Thursdays of each month at North Mar Church in Warren.

Anyone who would like to donate to Grand Addition may write Grand Addition in the memo line of a check and send it to Solace of the Valley, P.O. Box 563, Cortland, OH 44410.

Longtime Warren resident Cheryl Baker, who recently relocated to Toledo for her job, has her three grandchildren with her.

“Home schooling is going well so far. The teachers are going out of their way to make sure we have what we need for the kids. The teachers are on Facebook offering their help to anyone who needs it. This is definitely a time where we are all pulling together,” Baker said.

Recently, she helped her grandchildren as they did a hands-on science project.

Champion resident Bonnie Wilson said her grandson is an eighth-grader and is more independent today — needing less assistance than when he was in elementary school.

“I’m blessed. He is self-sufficient and self-motivated and is able to do much of his school work by himself. Older grandchildren are more responsible and know what the teachers expect,” she said.

Wilson said her grandson’s school gave each student a Chromebook and students can easily log onto the computer and get each subject’s assignments uploaded and submitted.

Wilson said other grandparents have expressed concerns about schoolwork when a grandchild has an Individualized Education Program because of special needs and challenges.

Wilson said she is now working from home so she is there with her grandson, with both of them working on the computers.

“For me it was a matter of getting adjusted. I think now it is harder for many grandparents because the breaks will not be there as grandchildren are home all day,” she said.

The school provides food for those grandparents who may be limited on funds and now have to feed kids at home even more, Wilson said. Many local schools let the families know when there is food available to be picked up, she noted.

“I can see where grandparents with several grandchildren would now be having to spend more money for food,” Wilson said.

Technology is the biggest change: while Champion schools where her grandson attends provided Chromebooks, not all schools can do so.