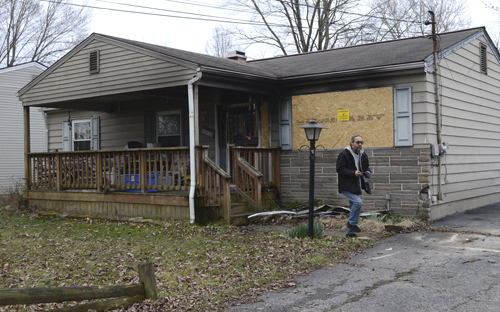 Staff photo / R. Michael Semple A family member who didn’t want to be identified leaves the scene of a Tod Avenue NW house fire on Tuesday. The occupant of the house, Charles Miller, was taken to the burn center at Akron Children’s Hospital main campus.

The blaze, reported around 8:29 a.m. Tuesday at 3233 Tod Ave. NW, left resident Charles Miller with what may be second- to third-degree burns on his arms, said Warren fire Chief Ken Nussle.

City firefighters responded shortly after receiving a call from a neighbor.

“The resident was lucky that a neighbor saw the fire,” Nussle said. “We did not notice a working smoke detector in the house.”

When firefighters went inside the single-story wood-frame structure, heavy black smoke was coming from the living room.

Firefighters Tom Rush and Shane Preston located Miller, who was collapsed on the floor between the kitchen and the living room. He was between 10 feet and 15 feet away from the front door.

“There was a lot of smoke, so it was difficult to see,” Preston said. “I could not tell if he was alive, so I told Rush to take him outside while I looked to see if anyone else was in the house … We were told there was a second person inside.”

No one else was found.

Nussle said the house had oxygen tanks inside.

The fire cause is not known. The Warren department and Ohio State Fire Marshal are investigating.

Nussle said the fire primarily was concentrated in the living room area, although other parts of the home experienced damage as well. No firefighters were injured.

Miller was taken to St. Elizabeth Youngstown Hospital and later was moved to the Akron Children’s Hospital burn unit.

The fire caused an estimated $18,000 in losses at the home. Although the damage was extensive, Nussle said the house was not destroyed and could be renovated.