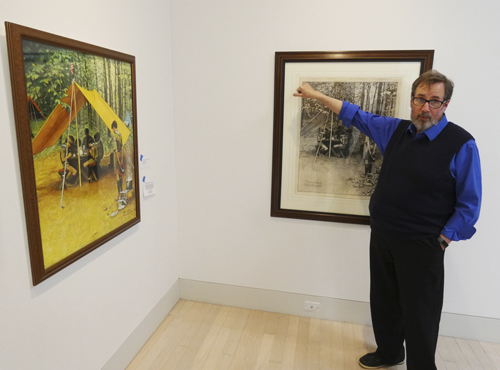 Staff photo / Andy Gray William Mullane talks about hanging the Boy Scouts of America art collection and its 65 Norman Rockwell pieces at the Medici Museum of Art in Howland. While many arts organizations are curtailing their events, the museum is sticking to its plan to open the exhibit to the public on Sunday.

Arts organizations often struggle financially, even in the best of times.

A directive from Gov. Mike DeWine on Thursday discouraging public gatherings of more than 100 people has groups canceling performances and museums temporarily closing their doors. Anything longer than a temporary closure could strain already tight budgets.

“If it’s longer than three weeks, we’re going to have to delve into our reserves, and our reserves aren’t huge for us,” said James McClellan, operations manager for the Youngstown Playhouse. “We’re a non-profit.”

The Playhouse did not cancel the second weekend of its production of “Venus in Fur,” but it is being staged in the 75-seat Moyer Room, not the main theater. The Playhouse will announce today whether its Youth Theatre production of “The Gone Away Place” will open as scheduled on March 27, but McClellan was not optimistic because Ohio schools are closed for at least the next three weeks.

The uncertainty also makes it unlikely the Playhouse can mount a replacement for the May musical “A Light in Piazza,” which was canceled before the governor’s directive.

“We may have to let go for the first time in a very long time the idea of a spring musical,” McClellan said. “We always seem to have one.”

Trumbull New Theatre in Niles had to cancel the final two weekends of the musical “The Spitfire Grill,” which opened March 6.

“There’s a cancellation policy in the leasing agreement (with the licensing company), but I don’t know if we’ll be able to recoup the last two weekends,” director Terri Gilbert said. “We’d like to bring it back somehow, but I don’t know whether the leasing house will let us stage it again (depending on availability).”

Other costs, such as sets, costumes and props, already have been paid for, and TNT only had three public performances instead of nine to offset those expenses.

Easy Street Productions had to cancel three performances of the musical “Nunsense” scheduled March 27-29 at DeYor Performing Arts Center’s Ford Family Recital Hall, and it has a collaboration with the Youngstown Symphony Orchestra for the musical “Disney’s Beauty & the Beast” still set for May 2-3 at Powers Auditorium.

“We put a big financial investment behind every show,” Easy Street cofounder Todd Hancock said. “Pulling the rug out from under us really put the whole company in jeopardy. We live from show to show, and most or all of the community theater organizations are in the same boat we are.”

“Nunsense” has a small cast and minimal costumes, but money already spent for things like advertising and postcard mailers can’t be recouped.

“We have to pay for the royalties before you can announce,” Hancock said. “That ties up a lot of our money. With two musicals, we’ve tied up $15,000 just in royalties. If we want it back, we can cancel the show, but we’ve already sold tickets and we want to reschedule. It’s really a tough spot to be in.

“With ‘Beauty & the Beast,’ we’re holding out hopes for that show, but we have to put a contingency plan in on rescheduling it … There’s no guarantee the ban will be lifted by then or what people’s fears will be.”

The Youngstown Symphony Orchestra, Easy Street’s partner on “Beauty,” had to cancel its final concert of the 2019-20 season on March 21 and a performance the following day at St. Christine Church in Youngstown as part of its Stained Glass Concert Series.

Patricia Syak, president of Youngstown Symphony Society, said they also need to reschedule with dance competitions and other groups that have rented spaces at DeYor in the coming weeks.

The symphony can rely on its cash reserves in the short term, she said, “But what might be considered the immediate impact is yet to be determined. Even if the ban is lifted in three weeks, we don’t know how the public is going to react, whether it’s, ‘Oh my goodness, I can finally go back out again,’ or if they’ll still be cautious about returning to a crowded space.”

The cancellation of the March concert also means the YSO can’t use it to launch its 2020-21 concert season, and Syak expressed some apprehension about promoting season ticket plans under the current uncertainty.

“It’s hard for the symphony to predict today what will happen in the future,” she said. “There’s no history to look back on. We’re all trying to develop a new protocol … As someone once told me, ‘Smooth seas don’t make for strong sailors.’ We’re all going to be strong sailors after this.”

One institution going against the tide of cancellations is the Medici Museum of Art in Howland, which plans to open “The Rockwell American Scouting Art Collection” to the public on Sunday. The exhibition includes 65 original works by Norman Rockwell and other pieces owned by the Boy Scouts of America.

John Anderson, one of the directors of Foundation Medici, said, “I don’t believe it makes any sense to participate in allowing everything to grind to a complete halt. There’s nothing coming out, from any medical person I’ve talked to, to persuade me otherwise. I’m not going to be intimidated by a decision made by people with whom I don’t agree.”

A private event with dignitaries from the BSA on Friday has been scrapped, but an invitation-only reception will go on as scheduled on Saturday, and the museum will open to the public at 11 a.m. March 22. While donations are encouraged to offset the cost of the exhibition, there is no admission fee.

Students learn to be ‘super’ writers

CHAMPION — Students at Champion Middle School had a lesson in writing attention-getting first sentences for ...

HOWLAND — A Vermont deputy and her police dog were injured Monday night when an impaired driver collided with her ...

U.S. Sen. Sherrod Brown — who said a few months ago that he didn’t see Joe Biden as the Democratic presidential ...

NEWTON FALLS — Village council has decided to postpone entering into a contract for installing new water and ...