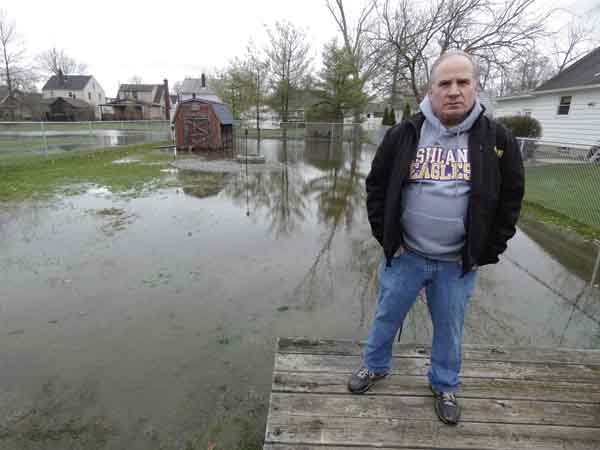 People were cleaning up the mess on Monday following strong weekend wind and heavy rain.

Water started to recede, and trees branches were being removed from roadways.

The National Weather Service in Cleveland reported 0.83 inches of rainfall Sunday. Perkins Park in Warren flooded throughout, including the playground area.

Tammy Vennitti’s family owns property at the corner of Diehl South Road and state Route 5 in Leavittsburg. She will once again have to wait a few days before flooding in the yard recedes.

“I get stressed out every time it rains. My daughter lives there and has two small children, and every time it rains — not just the heavy rains, but every time — that yard is completely flooded. This was really bad this weekend. The sump pump has been running non-stop. If the power goes out, then the basement will flood,” Vennitti said.

She said the water is supposed to drain into a nearby culvert, but it doesn’t get there. She believes there is a crack somewhere in the drainage pipe off state Route 5.

Vennitti said the problems began in 2016 when a nearby store was put in west of her home.

“I have been dealing with this problem since 2016 when all the flooding began. Before that it was not that much water,” she said.

She said she has been in contact with Trumbull County commissioners and engineering officials to get the problem addressed. Companies have come in to see the problem, she said, and to help with the line from the sump pump.

Children’s toys were floating in the water in the yard Sunday.

“This will take days before all this water is gone, and if it rains again, it will fill up because there is no place for the water to go,” she said.

Another family member, Robin Boyd, said whenever the electric goes out then the pump doesn’t work and water floods the basement. The family has lost furniture, a furnace, clothing and a new hot water tank.

“The water is not getting to the culvert because it is almost empty and all the water is in the yards. There is something wrong with the pipes,” Boyd said.

Michael Shrodek’s backyard at 917 Central Parkway SE in Warren was a wading pool Monday afternoon. On Sunday, he could only see the top of his fire pit in the center of the yard.

Shrodek said the amount of water draining into his backyard has been increasing every year for the last several years. Shrodek said he has spoken to his councilman and others about what has been happening.

He said the increased amount of standing water in his, and six other houses on Central Parkway and Trumbull Avenue SE, could be caused by several things, including a soccer field on the former Devon School property, 833 Central Parkway, that is on a higher grade than many of the houses south of it.

“A tree fell on a drain on a property two doors down from my house, crushing it,” Shrodek said. “Water could be coming down from the soccer field.”

Last year Shrodek, a Niles school teacher, put in nearly $10,000 worth of work in his backyard by adding a wire framed fence, a large dog kennel, and the backyard fire pit / barbecue area.

“I wanted to give my dog a place to run around and stay when I’m at work,” he said. “I also wanted to be able to enjoy my backyard.”

On Monday morning, Robert Boyles, 916 Trumbull Ave., left a pump running next to his large wooden shed in an effort to pump the pool of water that was in his backyard to the front, so the water would go down a drainage ditch.

“I don’t know about my neighbors, but I’ve had my basement waterproofed, so right now, it is dry,” he said. “However, during heavy storms the water is coming up against the property.”

Boyles said he has taken his concerns to the city.

“I would like for the city to come up with a plan to help residents,” said Councilman Ken MacPherson, D-5th Ward. “It collects a $5 a month stormwater fee from each property owner.”

MacPherson emphasized the city should, at least, attempt to provide some level of expert help.

“Perhaps, the neighbors can work together to hire a contractor to place a drain on one of the properties to direct the water away, so it is not standing in their yards,” he said.

MacPherson emphasized this is a problem that is not exclusive to his ward, but is happening all over the city.