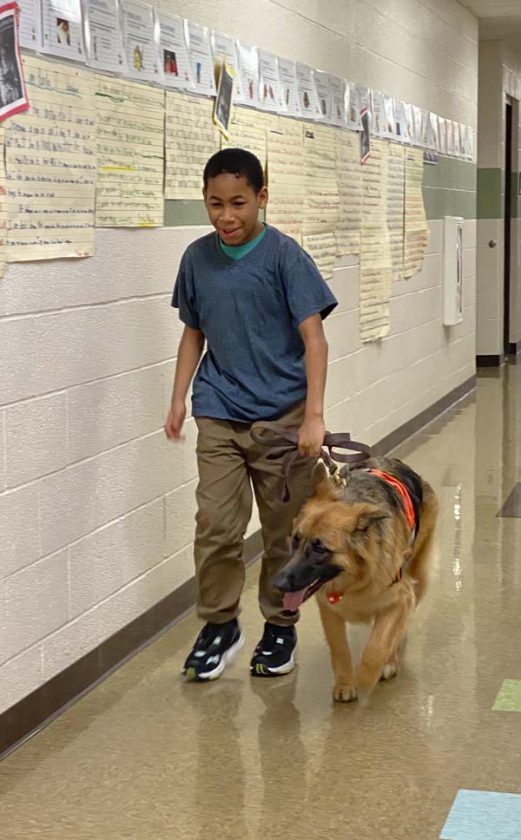 Submitted photo D’Eionte Stoutamire, 9, leads Shannon, the new therapy dog at Warren’s McGuffey PK-8 School, on a training walk along a hallway at the school.

The relationship between the two quickly blossomed to such a degree that the school’s students and staff recognize D’Eionte, 9, as one of Shannon’s primary handlers.

“He takes training and working with her very seriously,” said Jill Redmond, a school counselor at McGuffey. “And it’s obvious she’s taken to him.”

Several students have been introduced to 2-year-old Shannon since she arrived at McGuffey this past summer as the school’s first therapy dog. But, Redmond said, D’Eionte has “a special connection to Shannon that was noticeable from the get-go.”

The concept of having a therapy dog on site was introduced to the school a few years ago after two students were killed in an automobile crash. McGuffey “borrowed” therapy dog Beau, a golden retriever, from Willard PK-8 School to help students and staff cope with the sudden and tragic loss.

“We saw firsthand the impact Beau had on students and teachers and really everyone,” Redmond said. “He was a real comfort.”

Beau is set to retire at the end of the school year after gracing Willard’s halls the past four years. Like him, Shannon has brought comfort and calmness to McGuffey.

She spends one day per week at the school, but the goal is to expand her presence to two days per week by the end of the year.

Students earn rewards by meeting various classroom goals. Spending time with Shannon is one of those rewards. So far, D’Eionte has met the most goals and therefore earned the most time with Shannon. The fourth-grader spends much of his time practicing hand signals that serve as basic obedience commands telling Shannon, for example, to “come, sit, heel, stand, or stay.”

As D’Eionte is leading Shannon down the hall, a classmate, Donovan May, 10, approaches the two and asks if he can pet the canine. Always asking the handler for permission to pet a therapy dog is among the protocols students and staff have learned and practice regularly, explained dog trainer Angela Holland-Tancos of Angels in the Innfield LLP in Southington.

Holland-Tancos started working with Shannon before the school brought her in as a therapy dog.

“I enjoy the benefits I see with the kids and Shannon,” Holland-Tancos said. “The students have been extremely receptive. They’re comfortable with her, and she’s comfortable being here.”

Warren City is among a growing number of area school districts to bring therapy dogs into its buildings. The district’s Lincoln PK-8 School has partnered with a local kennel club that for the past 10 years has been bringing therapy dogs to the school twice a month, for an hour each visit, to spend time with students with special needs. The students work with the dogs in the library by talking to the canines, reading to them and simply spending time with them.

“There’s a lot to be said about these relationships,” Redmond said. “Sometimes a student, or even a teacher, walks by and wants to pet Shannon. It calms them and you can actually see them relax and refocus. We love having her here. She really has become part of the McGuffey family.”