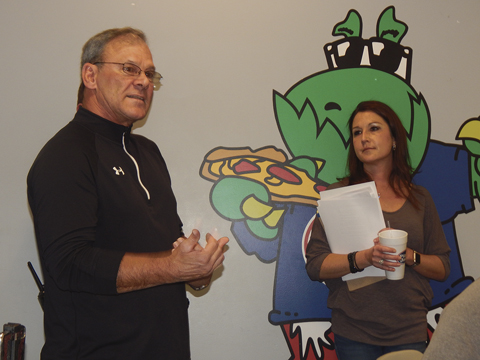 Don Newell of Hubbard Township, left, discusses with more than 25 residents ideas to help the township police department at a meeting Sunday at Pizza Joe's in Hubbard. At right is Molly Grilli who co-organized the citizens committee. Photo by Bob Coupland

HUBBARD TOWNSHIP — Members of a newly formed citizens committee said they will do whatever they need to help the township’s police department and have already established a fund to assist police officers if the department faces further financial challenges.

More than 25 residents and some police officers met Sunday evening to discuss ways to raise money and reduce costs to keep the department operating.

Molly Grilli and Don Newell, organizers of the group, said they want to work with trustees to see where there can be savings through cuts.

“There has to be some cost savings to help keep our police department solvent,” Grilli said.

She questioned where the savings will be if the township were to go with the Trumbull County Sheriff’s office, a move the committee is against. Being discussed by trustees is if the department is closed the township would get protection from the sheriff’s office.

Newell, a school board member and former Hubbard Township police officer, said he wants to find any way possible to continue the police department. He said that in 2001 the Hubbard school district faced the same problem of operating with limited funds.

“We found money instead of going to the taxpayers. We found grant money and did what we could to make cuts and savings to get the district in the black. That is what we need to do to help the police department,” he said.

Committee members had suggested to dissolve the police chief position to save money. Police Chief Todd Coonce has said he will retire at the end of 2020.

Resident John Bizub, a committee member who has been a firefighter/ paramedic, said he wants the trustees to be completely transparent with residents. He questioned if this was not always the case in the past.

“We need to see the money. Transparency is what we are asking for. We are the taxpayers and this is our money,” he said.

“We will continue meeting and come up with ideas. If the trustees show us they have been diligent and fiscally responsible to do whatever possible to keep the department operating then I can support a police levy. But to keep throwing levies out there and spending like we have been doing then no I can’t support a levy,” Coletta said.

He suggested that police should charge claims such as responding to accidents on Interstate 80.

A fund called “Friends of the Hubbard Township Police” has been established specifically for the police from private donations and fundraisers. Grilli said if a police officer gets in an accidents funds will be able to assist with medical bills.

Trustee Chairman Tom Jacobs, who attended the meeting, said he will take the information back to the trustees for review.

“I have listened to what they have said and will speak with the other trustees on any suggestions and ideas. We have always worked to be as transparent as possible with the residents. Our financial situation for the police department is not very good,” Jacobs said.