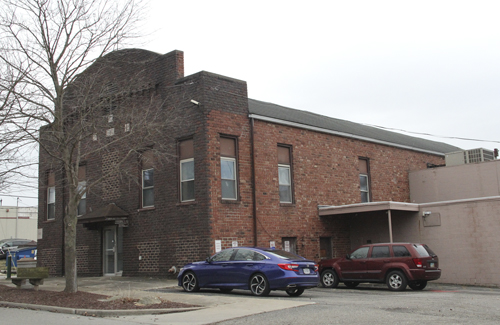 Staff photo / Allie Vugrincic The “Times building,” formerly home of the Niles Times Newspaper and the Niles Water Department, is next on the city’s list to be demolished, ideally through a partnership with the Trumbull County Council of Governments, which last year helped Niles tear down the old Garfield Elementary School for approximately $20,000.

NILES — After the apparent success of the partnership between the Trumbull County Council of Governments and the city of Niles that resulted in the demolition of the former Garfield Elementary School, Niles intends to submit another demolition project to the COG.

Mayor Steve Mientkiewicz said during a Wednesday finance committee meeting the city plans to work through the COG to bring down the building across from the city administration building on West State Street. Formerly the home of the Niles Times and used by the city water department before that, the building now is used for storage.

The demolition would make way for a parking lot for downtown, which Mientkiewicz said falls in line with the city’s downtown economic development strategy.

Mientkiewicz said the city hopes to get a similar price for the demolition as it did for the elementary school, which cost the city approximately $20,000 after it came down in April.

Mientkiewicz said tension between Niles and some other communities in the COG — most notably Weathersfield and Howland, which have been vocal in protesting Niles legislation that would require some residents and businesses from both townships to annex into the city of Niles to get city utilities — “shouldn’t be an issue” because Niles is a paying member of the organization.

At a meeting last week, the COG announced it is working to tear down a house in Farmington Township. The partnership is expected to save Farmington $5,000.

No representatives of Niles attended the meeting, but a city council meeting was held at the same time.

LaPolla said Thursday he was aware that Niles intends to submit another proposal, though it has not done so yet. He said there is a project application, which Niles could submit at the next COG meeting in April.

LaPolla said tensions with Niles should not affect the proposed project.

“We’re basically going to try to be neutral,” LaPolla said of the COG.

He said the COG wants to grow, and that takes precedence over disagreements.

“The good of the COG is the priority,” LaPolla said.

LaPolla said any entity can submit as many projects as it wants, and as long as the resources exist to complete the project, the COG will do so. He said if a second entity submits a project at the same time as Niles, the other entity ikely would get preference only because Niles already had one done.

“We used the first Niles project as a template to learn from,” LaPolla said.

He said the process has not changed since last year, except that a processing fee and application fee have been added.

Mientkiewicz said Niles was the only member of the COG that took initiative to submit a “major project” in the past.

“Here we are, ready to go again,” Mientkiewicz said.

He said the city is “going to move fast” on the project, with doments stored inside the Times building already being removed. Legislation is expected at next week’s city council meeting to bid out for asbestos removal, which must be completed before the city goes to the COG for the project.