Facility to sit on 158 acres 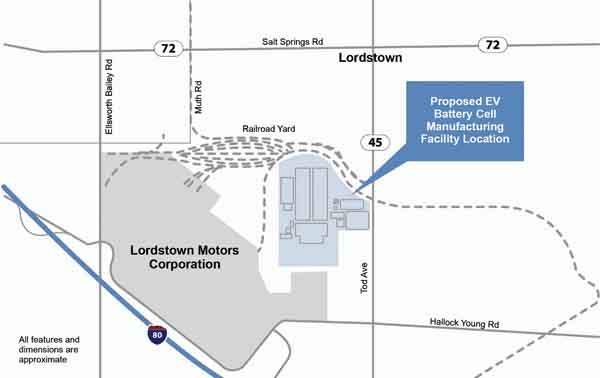 LORDSTOWN — General Motors has a signed purchase agreement for 158 acres adjacent to its former assembly plant for a $2.3 billion battery-cell manufacturing facility the automaker wants to build with South Korea’s LG Chem.

First reported on the Tribune Chronicle’s website, the deal announced Tuesday is with North Point Development near Kansas City, Mo., for the property on Tod Avenue, immediately east of what is now the Lordstown Motors Corp. facility.

Finalization of the agreement and closing on the property is subject to “ongoing diligence” and includes securing building and other permits to start construction and operate the plant, according to GM, which already has submitted permit applications to the Ohio Environmental Protection Agency and U.S. Army Corps of Engineers.

GM wants to close on the site by the end of March and begin initial site preparation sometime in the spring. Construction would include installation of utilities, extension of rail and road access and buildings.

“This move gets us a step closer to making the state-of-the art plant a reality and positioning the Mahoning Valley as a major force in technology and electric vehicle manufacturing,” said GM spokesman Dan Flores.

The facility will create more than 1,100 jobs and has been billed to be, when complete, among the largest battery-cell manufacturing facilities in the world.

Spokesmen with the Ohio EPA and Army Corps of Engineers confirmed GM has applied for a surface water permit from the state and a federal permit under the Clean Water Act.

A public notice from the Corps states the joint venture between GM and LG Chem, currently named GigaPower LLC, would result in the unavoidable impact of 65.9 acres of wetlands and 81 feet of stream. Forested wetlands impacted would be 16.7 acres and 49.2 acres of non-forested wetland.

GM is proposing to mitigate the impacts.

“This is the start of our public interest review process under Section 404 of the Clean Water Act for the proposed facility. We received their application last week. However, they have had multiple pre-application meetings with our staff and Ohio EPA over the past two months, and this process has included considering multiple siting alternatives,” said Scott Hans, regulatory division chief for the Corps of Engineers’ Pittsburgh District.

The corps will accept public comments on the proposal as part of its review of the project and environmental impacts and already has begun coordinating a joint public meeting with the Ohio EPA for the public to provide further comment, Hans said.

“To fulfill our obligations under the National Environmental Policy Act, all comments and factors will be considered prior to making a permit decision,” he said.

The Ohio EPA is reviewing GM’s application to make sure it is complete, according to agency spokesman Anthony Chenault.

The permit applications describe how multiple locations were evaluated, and how those were narrowed down to best meet the project’s needs while considering environmental impacts and restoration, according to GM.

The restoration plan includes the re-establishment of more than 130 acres in the Mosquito Creek Wildlife Area “as the best way to replace the ecological value and function” of the 66 acres of wetlands that will be affected by construction of the new facility, GM’s fact sheet on the project states.

The applications also detail how the restoration will be designed, constructed and monitored, according to GM.

“GM is committed to engaging with the community as we develop this project in a responsible and sustainable manner,” Flores said.

GM formerly owned the land, but rid itself of it, as well as dozens of other pieces of land across the U.S., as part of its 2009 bankruptcy. NorthPoint acquired the 173 acres in November 2014 from RACER, or Revitalizing Auto Communities Environmental Response Trust, which was assigned the task of overseeing the sale and redevelopment of the former GM properties.

NorthPoint planned to develop the property into an industrial park with a combination of industrial, warehouse and light manufacturing uses.

GM looked at multiple locations in the region; narrowed those to six and then to two. Selection criteria included technical, environmental and economic factors and timely availability. GM needed a large site with access to rail, a major highway and other infrastructure, according to the automaker.

GM and LG Chem announced in December the joint venture, what many believe is one of the largest-ever economic shots in the arm for the Mahoning Valley. It also lays the foundation for the region to be out front of the future of the automotive industry — electric vehicles.

GM in March idled its Lordstown assembly plant that for 53 years had churned out automobiles. GM sold the sprawling plant to Lordstown Motors Corp., another cog in the local electric vehicle infrastructure as it plans to produce battery-powered pickup trucks at the facility by the end of the year.

“I think GM has always been a good neighbor, and I feel they want to move forward with electric vehicles and they feel we have a good workforce,” said Lordstown Mayor Arno Hill. “We have always worked with them — all of the government entities have worked with them from the state on down.”

Hill said there have been preliminary discussions regarding incentives for the new plant and the state has been working on an incentive package, but because those talks are in the earliest stages, he did not have specifics.