VIENNA — A class ring that had been missing for 44 years was able to make its way back to the owner over the holidays with the help of the Vienna Historical Society.

Historical society member Christine Novicky said that last October, Michele Bizjak-Yenulonis of the Cleveland area contacted her about a class ring she found that potentially belonged to a 1975 Mathews High School graduate.

“It was a man’s class ring with initials engraved on it. Michele said her grandfather found it at Punderson State Park in Newbury, while working as a campground director there many years ago. Nobody ever inquired about a missing ring there, so he eventually put it in a jewelry box at home,” Novicky said.

Novicky said Bizjak-Yenulonis’ grandfather passed away in 1991 but the ring remained in the box in her grandmother’s possession. Bizjak-Yenulonis was recently going through the contents of the jewelry box and came across the ring. She decided that it was time to find the owner and contacted the Vienna Historical Society via social media.

“She used the society’s Viennapedia website database to check for potential graduates with initials that matched what was engraved on the ring. After scanning the class of 1975 in Viennapedia, it was narrowed down to one possible person,” Novicky said.

Novicky said she determined whose ring it could possibly be and took to social media to inquire about the Mathews High School graduate’s whereabouts.

A few people responded that the ring owner lived in Florida. She eventuallu was able to get a contact number for him and left him a message the day before Thanksgiving.

Novicky said the owner of the ring wishes to remain anonymous, but he did share his story of how and when he lost the ring.

Novicky said he and some friends were camping during his junior year (circa 1974) at Punderson State Park for a weekend. When they arrived at their campsite, the ring’s owner realized he didn’t want to potentially damage or lose his ring (that he only had for a few months) while they camped.

He handed the ring to one of his friends and told him to put it in the glove box of his truck. At the end of the trip he went to retrieve the ring from the glove box and it was nowhere to be found. He and his friends “tore apart the truck and the campsite” searching for the ring, but they could not find it.

Later, Bizjak-Yenulonis’ grandfather found the ring while working at the park and kept it safe, hoping some day the owner would return for it.

“Nearly 44 years later, the ring was packed up in a box and sent to Florida to its original owner. The owner finally got his ring back on Dec. 12, 2019. When he opened the box to examine his ring, he said “it still fits and it looks like new because it was in a jewelry box for 44 years.” 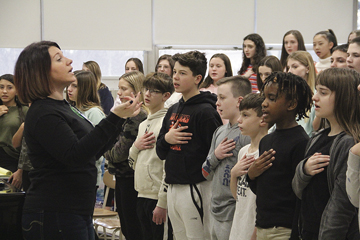