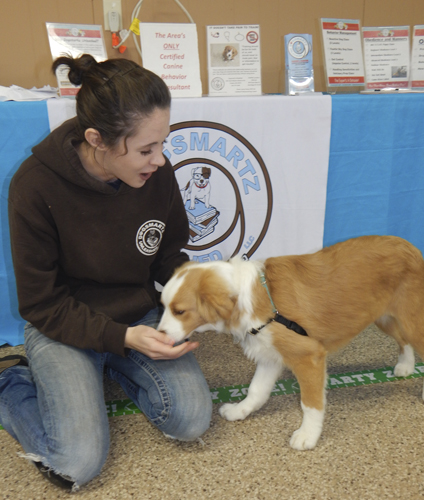 BAZETTA — Young canines got a chance to socialize with other dogs as the Friends of the Mosquito Lake Dog Park gathered Sunday for its version of the “Puppy Bowl.”

“Puppy Bowl” is an annual television show broadcast on the same day as the Super Bowl, with puppies playing on a miniature football field with toys and bones.

Terry Fields, vice president of the Friends, said two sessions were held Sunday afternoon at the park’s office building, with one for smaller dog breeds and the other large breeds.

“This is the first time we are trying this. We will see how it goes. We can start having it each year like we have the Howl-o-ween event at the dog park,” she said.

“I love this. It is a great way to help socialize the new pups and see what they might need,” Brenda Merrick said. “She has been around a couple other dogs a little bit. She has a sister at home.”

The Merricks were excited to see Bonnie Jean run around the room and meet the other puppies, most a little smaller than her.

“I wanted to see how he would relate to the other dogs,” she said.

“This event really allows for great socialization. The puppies are at the developmental and critical learning stage, and even when they go through training, they get play time with other dogs. They can have a great experience being here and spending time interacting and playing with other dogs,” Constiner said.

“We wanted to do this to allow the puppies to run around and play and see how they interact with one another,” Scarnecchia said.

Constiner said a Chihuahua-pug mix named Taco was a little nervous with other dogs, so he was given a little more space in another area.

“We want him to feel comfortable and have a good experience here,” she said.

Isabel Moss, 10, of Cortland, was among the children who attended.

She said she likes animals, and to help the Trumbull County Dog Pound this past Christmas, she made and sold more than 50 bracelets. With the money, she gave stockings filled with dog toys and treats to the pound dogs.

Never Muzzled had representatives at the event who last month handed out 30,000 pounds of dog food and items to area residents for the holidays.

WHAT: Trumbull Career / Technical Center Board of Education meeting Thursday The board: • Approved committe ...

On the record – Lordstown