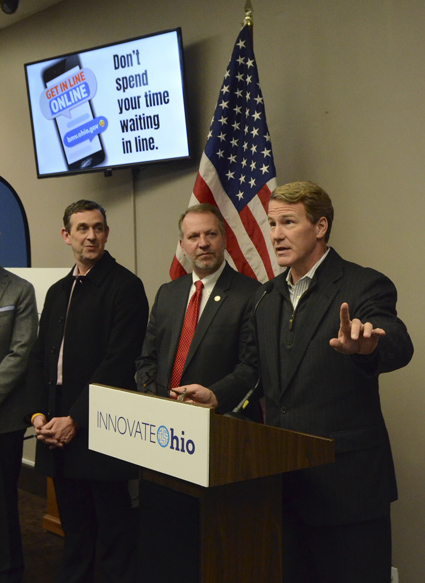 Staff photo / R. Michael Semple Ohio Lt. Gov. Jon Husted, right, announces the expansion of the Bureau of Motor Vehicles “Get In Line, Online” program on Friday at the BMV agency in the Union Square Plaza on the border of Youngstown and Liberty. With Husted is state Sen. Michael Rulli, R-Salem, left, and state Rep. Don Manning, R-New Middletown.

YOUNGSTOWN — The Mahoning Valley is the first region in the state to have an online registration program at all of its Bureau of Motor Vehicles offices.

The “Get In Line, Online” program was unveiled by the state in June at 13 locations throughout the state, although none were in the Valley at the time. The program allows people to check in at a BMV office online, allowing them to avoid waiting in line.

The Zanesville area will be the second expansion of the program Monday with the rest of the state joining by June 2020, Husted said.

“What we’ve focused on in this administration is customer service, and how can we use technology to improve that,” Husted said.

By going online to bmv.ohio.gov, a person can check in at a BMV office for services such as license renewal or vehicle registration. After that, a person has a four-hour window to arrive at a deputy registrar location, check in at a self-service kiosk and claim their spot in line.

On average, a “Get In Line, Online” customer has spent nearly 15 fewer minutes waiting in-person during the pilot program, Husted said.

Since the program started in June, it has saved people about 6,000 hours of time they would have spent at a BMV, he said.

When it’s fully implemented statewide, Husted said it will save about 150,000 hours of time for people at deputy registrar offices.

“Time is a valuable commodity,” Norman said. “It allows people to not wait in line and do things that are important to them.”

The BMV will review wait and processing times through this program to improve customer service, he said.