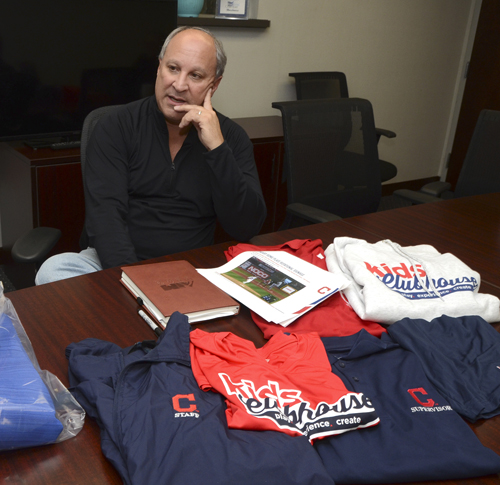 Staff photo / R. Michael Semple Tarry Alberini, CEO of US SafetyGear, Inc., talks about the three-year deal his company signed to be the preferred provider of game-day apparel for the Cleveland Indians. The deal, which is for stadium workers’ clothing, also gives Alberini’s company full marketing rights for the Tribe.

The supplier of safety equipment for construction and other industries continues to grow into doing more embroidery, printing and silk screening. It’s now hit a grand slam with acquiring its latest account: the Cleveland Indians.

This month, the Warren-headquartered company that already provides operational supplies to the Indians signed a three-year deal to be its preferred provider of game-day apparel for staff at Progressive Field.

That means at every one of the 81 home games starting in 2020, the 1,300 or so employees at the park each game will be outfitted in apparel provided by US SafetyGear.

The deal, worth about $120,000 per year for the company, also gives it full rights to advertise and market the Cleveland Indians logo, the block C.

It’s a move US SafetyGear, Inc.’s CEO Tarry Alberini said will bring the company “to the rest of the world.”

He estimates the apparel division at the Enterprise Road SW production and fulfillment depot will produce pieces numbering in the “six figures” for the ball club. Plus the company will be included on advertising on the scoreboard and behind home plate.

“This helps us to really piggyback on the brand of the Cleveland Indians, it really does,” Alberini said. “The coverage they have on game day, not just in the park, but through the radio network, TV, we’ll have digital signs through the ballpark during the game.”

US SafetyGear, Inc. and the Indians have had a relationship for about 15 years on the operations side of the club for safety equipment. It was at the company’s 30th anniversary open house in August, attended by some of the Indians staff, when the groundwork was laid for the apparel deal.

“They (members of the Indians staff) toured the facility here and went back to our apparel department and one thing led to another. We had already done some apparel for them on the staff side of the ballpark so they suggested when they came down, ‘You know what, we have to get you guys hooked up with our apparel folks at the stadium,'” Alberini said.

Some time later, Indians officials were back at the facility and liked what they saw, and the rest is history.

What US SafetyGear, Inc. will provide includes jackets, polo shirts, some screen-printed items and it also will supply the team shops with some special made-to-order products, Alberini said.

“My goodness gracious, this is a big huge step for our company,” Alberini said.

In addition to supplying the products, the eCommerce team at US SafetyGear, Inc. will create an online apparel website so employees can order direct from it. Leading that effort are Avi Cooper, eCommerce and marketing manager, and Shannon Phillips, marketing and design associate.

The company has similar portals for its other clients. The Indians site should be live in January.

The company also has relationships with the Cleveland Cavaliers for operational supplies and some apparel; with Kraftmaid for both; with Nestle for safety equipment and some apparel; and with Summit Racing for apparel for its catalog.

Alberini signed on with the Cavaliers around 2000-01, before the arrival of LeBron James, for operational supplies. People, he said, questioned the move because the team’s name recognition had waned; its play on the court hadn’t been good.

“Two years later, they drafted LeBron James and, of course, who looks like a genius. (People would say) ‘Hey Tarry Alberini, that’s the smartest move you made,’ because all of sudden the brand recognition for the Cavaliers is like humongous.”