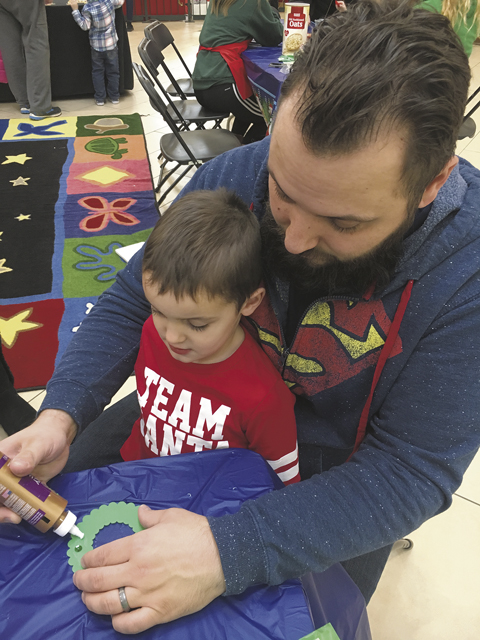 NILES — One aspect about his eight years as a student at the Rich Center for the Study and Treatment of Autism that has helped 13-year-old C.J. Costello thrive is the amount of attention he receives there.

“He excels in all of his subjects,” said C.J.’s mother, Michelle McDonald of Newton Falls. “He works better when he gets one-on-one attention.”

C.J., who was diagnosed with autism at 18 months, didn’t have to work to receive plenty of attention Sunday morning. That’s because he got to meet Santa Claus, who was the main attraction for the seventh annual Special Santa holiday photo gathering at the Eastwood Mall.

The Autism Society of the Mahoning Valley hosted the two-hour family-oriented event, which was geared for children and young adults on the autism spectrum and with a variety of special needs.

The event took place before the mall opened at 11 a.m. because too much stimulation from the music, bright lights, noise and flurry of Christmas shoppers likely would have been bothersome or overwhelming for some or most of the participants, said Robin Suzelis, society president.

More than 70 families registered to get photographs with St. Nick, who was seated next to a large, decorated Christmas tree in the main concourse. The holiday-themed gathering also was structured in a way to reduce lines and wait times, both of which many on the spectrum find difficult, Suzelis said.

The setting seemed to have a calming effect on C.J., who has limited eye contact with others, often repeats certain words and engages in self-stimulating behaviors such as hand flapping, all of which are common in the autism population, his mother said. On the other hand, the teen is active in swimming, soccer and gym class.

“I thought it was a hearing issue at first,” McDonald said about her son’s lack of verbalization. “He was tested and was fine, so there were no other choices than for it to be autism.”

Also excited to hang out with Santa Claus was Isiah Lett, 10, who was diagnosed with autism about two years ago after a painstakingly long wait.

“It was a long fight to get him diagnosed because he was on a wait list,” said his mother, Alicia Williams of Austintown.

It was anything but a fight, however, to get Isiah to agree to sit on Santa’s lap, as the two conversed with each other amid plenty of smiles.

Isiah has some characteristics typical of being on the autism spectrum, such as obsessively lining up objects in a certain order, adhering to an unusually limited diet and exhibiting problems with transitions, Williams said.

“He has daily meltdowns, but he’s trying to learn how to self-regulate,” Isiah’s mother said. “He tries his best in everything he does, and I’m thankful he tries as hard as he does.”

Santa Claus probably also will occupy a place in photo albums in Joel and Samantha Fricker’s Girard home, because they have plenty of pictures of St. Nick with their two sons, Nolan, 4, and Bryce, 8.

In addition to holding his own in school, Bryce receives physical, occupational and speech therapy once or twice weekly. He also has a close and typical relationship with his younger brother, Samantha said.

“They do everything together; they’re like best friends. They fight and play together, and both like video games,” she said.

Also on hand was Mrs. Claus, who supervised a series of “snowball fights” between some children, who used balls made of a soft material pleasing to many with sensory issues. The event also included making tree ornaments as well as coloring and other similar activities.