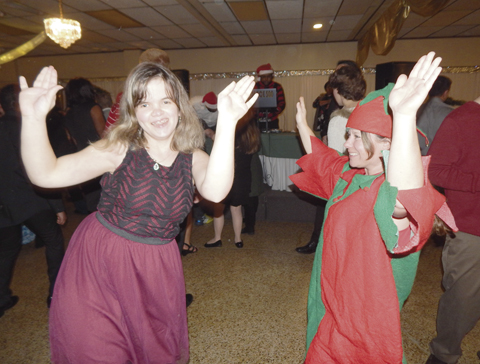 GIRARD — Adrianna Farley, 14, of Warren, and Josh Jackson, 18, of Youngstown, were all smiles as their names were drawn Wednesday, naming them the snow prince and princess of the 19th annual Winterfest Dance.

The four-hour event held at the Mahoning Country Club in Girard had more than 350 special needs students from high schools in Trumbull, Mahoning and Columbiana counties enjoying dancing, dining and a visit from Santa and Mrs. Claus.

Jeanne Constantino, a teacher at East High School and event coordinator, said she started the event as a way to provide a wintertime dance for the special needs students.

“Many of the students do not always attend the school dances or their school prom. We wanted to have a dance for them. They get to interact, socialize, eat and have an evening of fun,” she said, noting the students love dancing, especially the limbo.

For the prince and princess selection, each attendee had a ticket with their name and school placed in a box with a male and female student from each school pulled as a representative, and then from that group of students the names of the Winterfest prince and princess are named.

As the students left the event, they were given a special bag of candy along with teddy bears and other items given out through a drawing.

Farley, a freshman at Harding, said she was very surprised and excited when her name was called as princess.

Several other Harding students were at the event.

Riecka Wolcott, 17, a sophomore at Harding High School, said she likes being at the event as she received a special bunny balloon.

“I like the dancing, the music and having fun.” she said.

Ronald Davison, 16, a student at Harding High School, said he likes the food and dancing, but said he was hoping not to be selected the prince.

“This is fun, but I don’t want them pulling my name,” he said.

Constantino said students from East High School sign up to volunteer as Santa’s helpers at the event, helping to escort the students whose names are called for prince or princess. She said the students receive community service hours for helping.

London Black, 17, a senior at East High School, said this is her last time helping at the event, having helped in past years.

“I like seeing everyone having a fun time. You can see how much the students enjoy being here,” she said.

Maurice Steele, 17, also of East High School, volunteered at the event, handing out candy canes and other special gifts to the students.

“This was the first time I have helped here. I have had a lot of fun and can see that everyone else is, too,” he said.