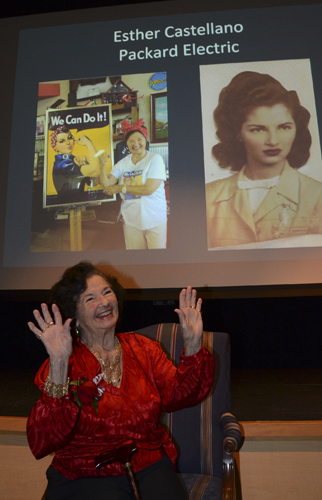 Staff photo / R. Michael Semple Esther Castellano, 97, of Warren, who worked at Packard Electric as a Rosie the Riveter, is thrilled to be honored at Friday’s Pearl Harbor and Beyond program at Kent State University at Trumbull. The program is sponsored by the Tribune Chronicle; supported by Veterans of Foreign Wars Post 1090 and American Legion posts 700 and 737; and coordinated by 1st Lt. David Luther, Civil Air Patrol, Youngstown Air Reserve Station, and Sue Shafer, Tribune Chronicle.

CHAMPION — At 101 years old, Mary Molnar Clay kept the mood light during the Pearl Harbor and Beyond program on Friday.

The small but mighty woman, wearing sparkly accents and making the crowd laugh, was recognized as a local Rosie the Riveter during World War II, joining other Rosies and veterans.

With Lt. Col. John Boccieri, a member of the Air Force Reserve, as the master of ceremonies, the annual event came about when the Rev. David Luther, chaplain and first lieutenant in the Civil Air Patrol at the Youngstown Air Reserve Station, wanted to show younger generations about the Greatest Generation.

“I started thinking about the World War II generation, and we’re going to forget about them soon” as their generation ages, Luther said.

Deciding to be proactive, Luther looked at a calendar and said the only day that seemed to work was Pearl Harbor Day.

Since 2014, the program has highlighted veterans from Trumbull and Mahoning counties, and their support systems alike, with the addition of “Rosie the Riveters” this year.

Helping to bridge generations, youths from the Civil Air Patrol were on hand to help throughout the evening, which was held at Kent State University at Trumbull.

During the number, feet of the Rosies and veterans — sitting in the front row of a packed auditorium — could be seen keeping time, gently laughing at memories the song brought to mind.

A play, “Stepping Up As Rosie,” inspired by some local Rosies, was shown, giving insight on how women came to the decision to work during the war. It was directed by Melissa Trickett.

Tim Tracey spoke, sharing the story of his father, Capt. Ed Tracey of Cortland, who met actor Clark Gable and fought in the Battle of the Bulge.

One of the veterans recognized was 94-year-old Jack Elston of Southington.

Known as the “candy-kiss man,” Elston hands out Hershey Kiss candies to people he meets, which he did after the program closed.

Elston served in the United States Army from April 1943 until February 1946 as an ammunition handler and military police officer. Once he left the military, Elston worked at a steel mill, then as a pattern maker.

Describing himself as “a playboy,” Elston said he was about to head home when he attended a dance with some buddies, and saw twins from an Eddie Bracken movie.

“They were the most beautiful twins in the United States” during that time, he recalled.

The twins sat a little distance away in a gymnasium, and Elston told his friends about the women.

Throughout the dance, the sisters didn’t dance with anyone. Squeezing his way between two sailors headed in the girls’ direction, Elston pointed to a sister and she nodded her head yes.

They danced the rest of the dance together. Elston didn’t see the twins again until he came across that same movie on Netflix decades later, once again watching them on the screen.

The memory of the beautiful twins was one he shared with his daughter years later, still laughing at the memory.

Looking back, Elston is happy with the life he’s had, which also included a marriage of 65 years.

“I’ve had a real good life. I wouldn’t trade my life for anything,” he said, smiling.

World War II veterans or descendants can email their stories to Luther for next year’s program at pearlharbor.beyond@gmail.com.