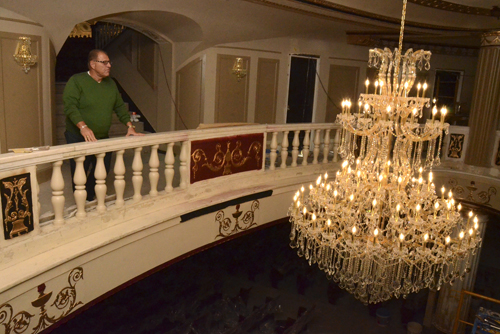 WARREN — Plenty of work continues at the Robins.

Last week, crews reinstalled the restored seats, laid carpet and measured for the lighted strips that will keep audience members from tripping when walking up the balcony stairs.

Other jobs are complete — such as the 8-foot-tall, 6-foot-wide fully lit chandelier that hangs from the mezzanine ceiling and illuminates the rotunda — and indicate that the 97-year-old theater is almost ready for its opening night.

The official opening night is Jan. 9, 2020, exactly 97 years after theater first opened in 1923. But a sneak peek is planned Saturday with the Trans-Siberian Orchestra tribute band, First Snow.

Mark Marvin, who purchased the building in December 2017, said what visitors see on Saturday will be about 90 to 95 percent of finished venue.

“There are few items we still have to tweak,” he said. “There are some things we’re purposely holding back, saving for the special occasion.”

Cost for renovating the theater, which had been closed for more than 40 years and had sustained significant weather damage, was estimated at $6.5 million at the time of purchase. Marvin dropped that estimate to $6 million at a news conference in September, and he now is gauging the final as “somewhere between $5 million and $6 million.”

The savings came from several sources. They were able use about 90 percent of the original duct work for the heating and air conditioning, which produced significant savings, as did using existing conduits to run new electrical lines.

“We value engineered a lot of things,” Marvin said.

Finding a local plasterer and painter, Harry Leith, who could do the detailed restoration work saved travel and hotel expenses.

Sunrise Entertainment President Ken Haidaris, who is booking entertainment for the new theater, praised the restoration.

“The attention to detail, the choice of colors is incredible,” he said.

The restrooms have been expanded, preserving the original marble wherever possible and picking flooring and tile that complement those vintage elements.

“The faucets in the bathroom are touchless faucets, which is today’s technology, but the look of the faucets are more period,” Marvin said.

The chandelier follows the same philosophy. It has an ornate Italian Renaissance look but uses 87 LED lights to illuminate its 5,000 crystals.

While many of the cosmetic touches were picked to recreate how the theater looked in the 1920s, other touches are pure 21st century.

Kent Stage owner Tom Simpson, who is working with Sunrise Entertainment in booking acts for the new venue, said they have installed a line-array digital sound system capable of delivering quality audio to all corners of the theater.

“Back in the old days, sound systems just blasted straight forward,” Simpson said. “With a line-array system, you have multiple components, different frequencies. You can cover a whole room, and the sound is the same level in row A as row Z. You don’t have to blast out the person in front just so you hit the top of the balcony anymore.

The theater also will have an all-LED lighting system for the stage that should be able accommodate the needs of a wide variety of attractions.

“There are dozens of moving lights,” Simpson said. “The capabilities of them are phenomenal. … It will be capable of being subtle and simple to spectacular and very active.”