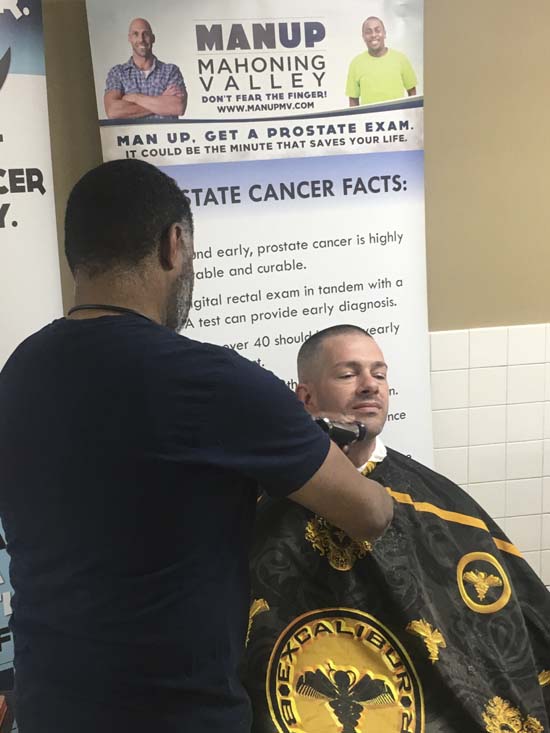 AUSTINTOWN — Steve Burbrink recalled having worked six or seven days per week and leading a busy life that left visiting a physician at the bottom of his priority list — until a biopsy revealed he had Stage 2 prostate cancer.

“I went to my doctor, who thought it was an infection. My numbers were elevated,” recalled Burbrink, who was referring to the results of a prostate-specific antigen blood test.

About seven years ago, the biopsy showed that Burbrink, who was working at the General Motors Lordstown Complex and as a disc jockey, had eight or nine cancerous slivers in his prostate, which eventually led to robotic surgery at age 53. Other than having problems with urination, he had few symptoms, but consequently, his prostate had to be removed because of the aggressive nature of the disease.

Nevertheless, “I’d rather deal with the side effects than cancer,” he said.

Nowadays, Burbrink is dealing with trying to get more men age 40 and older to receive free screenings for the disease — a message he made clear at the annual “No Shave” Shave-off on Monday in the Austintown Fitch High School cafeteria.

Hosting the event were the Mercy Health Foundation of the Mahoning Valley and Man Up Mahoning Valley, a foundation component program aimed at educating area men about the need to get checked.

More than 40 teachers, administrators, police officers, community leaders and others emerged clean-shaven after having participated in the 90-minute gathering at which more than 1,000 students watched during their lunch periods. Beforehand, the men had grown facial hair as part of “No-Shave November” in an effort to start conversations about the importance of receiving routine prostate cancer screenings.

“When you see someone who is normally clean-shaven with facial hair, people ask questions,” Burbrink said in a statement. “That’s an opportunity to have a conversation and raise awareness.”

Maraline Kubik, the Mercy Health Foundation’s manager of annual programs and community outreach, noted that the event raised more than $1,000 that the foundation will use to make it possible to continue providing free prostate-cancer screenings.

It’s critical that men realize many types of the disease are likely to be cured if caught in the early stages. The Shave-off event began several years ago to raise greater awareness of the importance of getting screened for prostate cancer, “even if you feel great,” Kubik stressed.

In addition, screenings are available at area churches as well as during the annual Panerathon, African American Walk and many other events in the region, noted Paul Homick, foundation president.

Also happy to shed his facial hair was officer Dan Burich of the Austintown Police Department.

“This is our third annual event. It just keeps getting more successful every year,” said Burich, who noted that the department raised about $560 and works in partnership with the Mercy Health Foundation and Austintown schools.

Burich, who’s been with the department about seven years, said that an early routine, 10-minute screening can save lives. He added that about 28 officers participated.

Even though growing beards is against department protocol, Chief Robert Gavalier was happy to look the other way, Burich continued.

“It’s kind of a treat to not have to shave for a month. We got to violate our uniform policy for one month, for a good cause, that our chief has graciously allowed us to do,” he said.

“It’s a great cause. We do a lot for the community, and we’re very proud of that,” Principal Tim Kelty said after his shave.

Also at the gathering, Austintown Elementary School presented a $500 donation to the foundation and Man Up Mahoning Valley.

In addition, Burbrink, a seven-year cancer survivor, is facilitator for a prostate-cancer support group that meets at 10 a.m. the second Saturday of each month at Yellow Brick Place, a cancer wellness center in Youngstown. About 40 men are active with the group, he said.