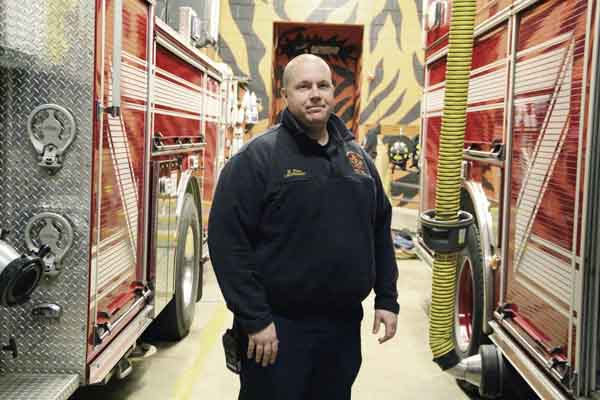 HOWLAND — Every day the life of a firefighter involves adapting to changing situations, but for Trumbull County’s busiest fire department, each day also brings on the challenges of coordinating limited crews and trucks to respond to an ever-growing onslaught of calls.

“Every day is different, every call is different and there’s nothing that is ever textbook,” said Howland Township Assistant fire Chief James Sapp.

The Howland Fire Department answered 3,493 calls from Jan. 1 to Nov. 30, and a busy day Wednesday pushed those numbers even higher, with 13 calls coming in before 5 p.m.

Sapp said the reason Howland keeps so much busier than neighboring fire departments hinges largely on the influx of people to the township during the day — doubling or tripling the population.

“The call volume has considerably increased over the past several years,” Pace said. “We have an aging population. We take a lot more falls with elderly patients. We also have more motor vehicle accidents.”

In November, the department responded to a total of 297 calls, noticeably more than neighboring Niles and Cortland, which took 229 and 158 calls in November, respectively. Of Howland’s nearly 300 calls, 209 were emergency medical service calls and 16 were car crashes, according to the department.

In addition to responding to homes for common medical calls like falls, the department transports patients from Urgent Care facilities, nursing homes and doctors’ offices.

“We have a lot of medical facilities and doctor’s offices we respond to,” Pace said. “People go to urgent care and then can’t drive themselves to the hospital.”

Hotels like Avalon Inn on Warren Sharon Road, Capri on East Market Street and Holiday Inn on state Route 46, as well as the businesses of the Golden Triangle that employ thousands of workers, also bring extra people into the township daily.

Especially this time of year, with holiday shoppers out in full force, extra bodies and extra traffic are coming into the township, meaning Howland firefighters have to respond to more calls.

Juggling the many incoming calls sometimes means captains and lieutenants deploying vehicles while on another call or sending a vehicle that hasn’t returned to a station after the last call it took. It isn’t unusual to see Sapp or fire Chief James Pantalone on a truck when the calls start rolling in one on top of another — whatever it takes to respond as quickly as possible.

“A lot of it comes down to our people. The staff puts in the effort to accomplish our goals,” Pace said. He said the goal is to “make sure residents get exactly what they need as fast as they need it.”

CALLS ON THE RISE

But Howland isn’t the only department that has seen an increase in calls — in Niles, fire Chief Dave Danielson said the incoming calls have been steadily increasing, with last year setting a record high.

“I’m expecting to set a record this year. Most of this is the amount of EMS calls we respond to,” Danielson said. The department has a staff of 33, with about seven people trained in EMS, 10 EMTs and the rest first-responder trained.

With three fire engines and one ladder truck running out of two stations, the department responds to EMS calls, but does not transport patients to hospitals.

“We have years where you’ll run a few less calls, 10 or 20 less, but usually the following year we’re back up and even further,” Rea said. “Most of the time we end up surpassing what we did the year before.”

Rea attributed the rise to the aging population and aging infrastructure, which can lead to electrical fires in homes and other potentially dangerous problems.

He said especially this time of year, the department responds to a high number of shortness of breath and chest pain calls as cold and flu season takes a toll on older residents. He estimated EMS calls comprise 90 percent of the department’s calls.

In the city of Warren, where the department operates three stations and five trucks with a staff of 65, call volume is significantly lower, as the department does not respond to EMS calls. In November, the Warren Fire Department responded to 114 calls, bringing the department up to 1,335 since the beginning of the year.

A representative of the department said calls have been “pretty steady” over the past several years, as firefighters respond to fires, crashes, gas leaks, elevator rescues and other service calls.