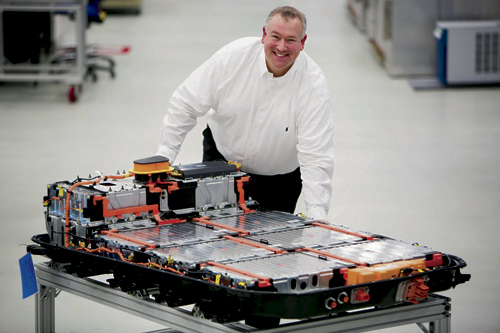 LORDSTOWN — General Motors and South Korea’s LG Chem are partnering to invest $2.3 billion to develop and mass produce electric vehicle battery cells near Lordstown, where the automaker shuttered its assembly plant this year.

The joint venture is expected to create more than 1,100 new jobs — not too far off from the 1,500 lost when GM closed the doors and stopped producing the Chevrolet Cruze.

But the question remains: Where exactly will what GM said would be among the largest battery factories in the world be located?

GM said Thursday ground would be broken on the manufacturing facility in mid-2020. All the automaker said on its location is the assembly plant would be on a greenfield manufacturing site in the Lordstown area.

State Sen. Sean O’Brien, D-Bazetta, said he was told by GM on Thursday it is looking at possibly three sites in the Mahoning Valley.

“I know General Motors’ commitment is to our area of the state,” said U.S. Rep. Tim Ryan, D-Howland. “We were dealing with the same thing with TJX. They wanted to come to our area, and you have to find the right site for them, a site that works for them. You remember all the back and forth with Lordstown and the local community and all the hearings, the public hearings we had to have. I would assume that same process would have to happen again. Hopefully it could be less dramatic than the TJX project was.”

TJX is building a massive distibution center on Bailey Road.

The news comes eight months after GM idled its 6.2 million-square-foot facility in Lordstown after 53 years of vehicle production, the last 10 or so of which was making the Chevrolet Cruze, once one of Chevy’s best-selling vehicles.

The last Cruze was produced March 6.

NO TIES WITH FORMER FACILITY

GM sold the plant last month for a reported $20 million to electric truck startup Lordstown Motors Corp., which plans to start production of the Endurance, a commercial and passenger pickup, by the end of 2020.

General Motors Chairwoman and CEO Mary Barra said GM has no ties to Lordstown Motors, which wants to locate component suppliers such as battery, wiring harness and electric motor manufacturers at the sprawling plant.

“We hope they are very successful in this commercial vehicle they are going to be putting into the market place, but we don’t have any type of formal relationship other than we are very supportive of wanting them to be successful,” Barra said.

But with this announcement and moves being made by Lordstown Motors, the greater area is being positioned as a hub for technology and electric vehicle manufacturing.

“With this investment, Ohio and its highly capable workforce will play a key role in our journey toward a world with zero emissions,” Barra said. “Combining our manufacturing expertise with LG Chem’s leading battery-cell technology will help accelerate our pursuit of an all-electric future.”

The batteries will be used in GM’s next generation of electric vehicles, including a second battery-powered truck GM plans to introduce in the fall of 2021. LG Chem already has a plant in Michigan that makes battery packs for Chevrolet’s Volt.

It’s unlikely the employee hourly wage at the new plant will reach the $30 GM pays its unionized assembly plant employees. Still, in Thursday’s news briefing on the announcement, Barra said she believes the jobs will pay well.

“Obviously to have successful electric vehicles we have to be competitive,” Barra said. “This is a component so this will follow our component strategy, but I still think these are very good-paying jobs.”

Also, whether workers there will be represented by United Auto Workers will be left to the workforce and if it wants to organize.

Ohio is working on assembling an incentive package for the project, but Barra declined to discuss specifics. Matt Englehart, spokesman for Ohio’s private, nonprofit economic development group, JobsOhio, said details won’t be released until the deal is final.

He did not have a timetable on when that might be, but said discussions with GM have been ongoing and are part of Ohio’s long-term strategy as the automobile industry continues to evolve “toward increasing electrification of vehicles.”

“Ohio wants to be on the forefront of that industry. … This gives the state an advanced battery manufacturing facility to support future growth in the industry,” Englehart said.