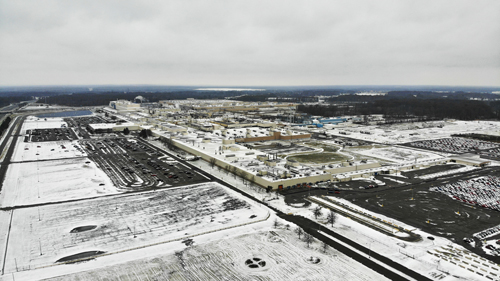 AP In this Nov. 28, 2018, photo, snow covers the perimeter of the former General Motors plant in Lordstown. GM has agreed to allow Lordstown Motors Corp. to borrow up to $40M as the fledgling automaker tries to raise capital to operate.

LORDSTOWN — General Motors structured the sale of its former assembly plant in a way that lets the new owner take possession and work toward the launch of its electric pickup truck while still raising money to operate.

GM spokesman Jim Cain declined to discuss specifics of the deal Monday, but documents related to the purchase by Lordstown Motors Corp. bear out the scenario.

It’s said to have been done in such a manner by GM because labor negotiations with and a strike by United Auto Workers disrupted Lordstown Motors’ capital-raising effort.

The automaker has those options on the table through April and a third option through May to buy back the 6.2 million-square-foot plant and other transferred assets at the facility it closed earlier this year.

Cain said he could not comment on the lease options or if they are in any way connected to GM’s joint venture with South Korea’s LG Chem to invest $2.3 billion near Lordstown on electric vehicle battery-cell manufacturing facility.

The company took possession of the plant last month. It’s planning the launch of the Endurance, a battery-powered commercial and passenger truck, for late 2020. But first, it needs to raise far north of $300 million to pay back GM and repurpose the facility that’s been idle since March 6, the day the last Chevrolet Cruze was produced.

A message seeking comment on the line of credit and options was left with Steve Burns, Lordstown Motors’ CEO.

GM and LG Chem announced their partnership last week with plans to break ground in mid-2020. A location hasn’t been disclosed except on a greenfield manufacturing site near Lordstown. It’s believed GM is looking at as many as three sites in the Mahoning Valley for the plant that would employ up to 1,000 workers.