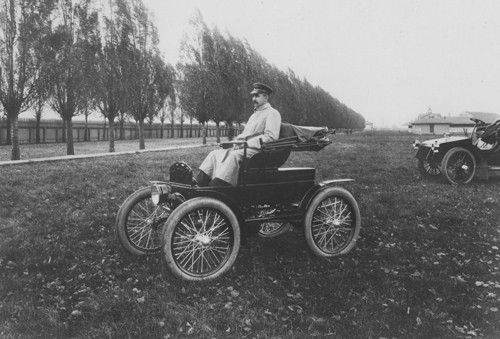 WARREN — There’s nothing new under the sun — including electric vehicles which, with steam vehicles, dominated the automobile market at the turn of the 20th century.

“Electric vehicles were incredibly popular at the turn of the century. In fact, electric and steam vehicles outnumbered gasoline vehicles by about 80 percent,” said John C. Lutsch, program and marketing manager for the Crawford Auto-aviation Museum in Cleveland.

At the time, Ohio was a leader in automobile manufacturing — Cleveland was “Detroit before Detroit became Detroit” — and Cleveland-based Baker Electric was a pioneer in electric vehicles.

The second Baker electric automobile ever sold was to Thomas Edison, who was instrumental in the design of batteries that were used in electric vehicles, said Lutsch.

Electric vehicles were eventually eclipsed in popularity by combustion engines, but in the early 1900s when Baker was in operation, they were a choice mode of transportation, according to Lutsch. He helped put together an exhibit on the history of vehicles called “Electric, Steam or Gas,” which is at the Cleveland History Center at the Crawford Auto-aviation Museum through March.

“Keep in mind, at that time, the road infrastructure was very poor and very limited. … For most automobile owners it was a very, very short duration trip and therefore you could get anywhere with the vehicles that were electrically powered,” Lutsch said.

Electric and steam-powered vehicles also were much quieter and safer than combustion vehicles, which had to be started with a hand crank before the invention of the electric starter.

“Any time you wanted to start a combustion vehicle, you had to crank it by hand. It was very dangerous. Sometimes the compression could almost reverse itself and that handle would start to very rapidly rotate in the opposite direction,” Lutsch said. “People would end up breaking their wrists.”

Electric vehicles, much like the newer vehicles of today, could be turned on with the push of a button.

Early manufacturers faced many of the same problems with electric vehicles that automakers face today — and they responded by seeking similar innovations. Lutsch said a Baker Energy advertisement from around 1913 boasted the installation of convenient charging stations around the city of Cleveland.

He said Baker and other electric automakers were doing serious research into improving battery life and electric motors 100 years ago.

So why, at a time when the electric grid was expanding, did electric vehicles fail to combustion? Lutsch said it was cost that ultimately doomed the early electric and steam vehicles.

At the end of World War I, oil prices dropped from around $3 per barrel to 30 cents after oil reserves were found in the United States, making gasoline cheaper to manufacture, Lutsch said. Oil became not just a resource but a key factor in national defense.

At the same time, combustion engines were becoming more reliable, and the assembly line process was being invented by Henry Ford. An electric or steam car of the day ran around $8,000 to $10,000, but Ford’s Model T cost less than $700.

He said gasoline shortages and increasing environmental awareness have brought electricity back into the picture.

“You can see that most clearly in the acceptance that the automobile industry is moving toward all-electric vehicles, and that it’s not going to stop,” Lutsch said. “Unfortunately, people have no access to what went on before or they’ve forgotten about it, but this is the same kind of technology drive that had been going on. We’ve come full circle now.”