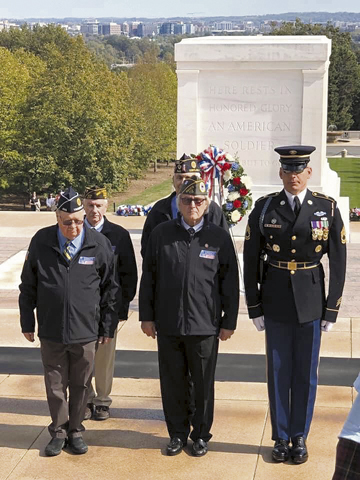 From 1956 to 1960, Young was in the Air Force Honor Guard and stood in death watch in the Capitol Rotunda at the Tomb of the Unknown Soldier over those who lost their lives serving the United States.

Young stood over the catafalque — a black stand that holds the casket of the deceased in the rotunda — that once held President Abraham Lincoln’s casket, he said.

“There is an overwhelming feeling, a presence. … You can’t explain, it is overwhelming. It is a humbling place,” Young said.

Young said many today don’t understand what it means to serve the country and sacrifice for the safety and future of others.

“People just don’t understand, they don’t see it, they don’t hear about it; they are being cheated, in my opinion,” Young said.

He attended Wednesday’s Trumbull County commissioners meeting, which was held at the Veterans Services building in honor of Veterans Day on Monday.

Young and seven other Trumbull County veterans traveled to Washington, D.C., last month to participate in a wreath-laying ceremony at the Tomb of the Unknown Soldier in Arlington National Cemetery and laid roses on the graves of 20 Trumbull County residents buried there.

Herman Breuer, director of Trumbull County Veterans Services, said the trip was important because it showed that those 20 deceased residents — 15 of whom died in World War II — are not forgotten.

“Some of these individuals’ graves may not have been visited in 20 or 30 years,” Breuer said. “I think it’s important that the community knows these individuals and where their graves are.”

Breuer said the 15 Trumbull County residents killed in action in World War II would have likely been interred in Arlington Cemetery sometime after 1947. Their remains would have been buried in Europe and then repatriated and moved to Arlington many years later, he said.

“It was humbling for us to go there and say their names again,” Breuer said.

Breuer and others returned from the trip with photographs of each headstone.

Young, who spent a year in Korea from 1960 to 1961, and left the service in 1964, represents the American Legion and is a veteran services commissioner.

The care taken by service members to ensure Arlington remains a dignified and holy place is obvious, Young said. But he was disturbed to see guards had to correct the behavior of some visitors who weren’t paying the memorial the respect it deserves, Young said.