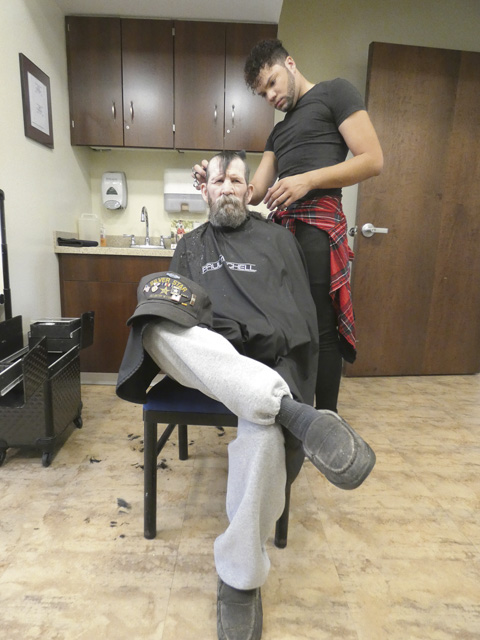 That was by design, according to Washington Square CEO Theresa Bartlett.

“We don’t do it on Veterans Day so they are able to attend the other events,” she said.

This was the seventh year for the celebration at the center, which is the only VA provider in Trumbull County. It included free haircuts, blood pressure screenings, massages and lunch, as well as raffles and giveaways.

Among the new offerings this year was at least a half dozen dogs from GO TEAM Therapy Dogs that were dressed in patriotic attire. Bartlett said they also had more vendors than in the past to provide information about some of the services available to area veterans.

Lamont Brinson of Warren, who served in the Marine Corps from 1977 to 1979, was enjoying his first-ever massage, and masseuse Teresa Lisum of Newton Falls had a sign-up sheet filled with veterans waiting for their turn in her massage chair.

“It’s fantastic how they are recognizing veterans a few days before Veterans Day,” Brinson said. “I’m really enjoying the experience.”

Many of the veterans traded stories while waiting for the chance at a haircut or a massage.

Ernest Paugh of Warren, who served in the Army from 1966 to 1995, said: “It’s good to see old friends. This brings all the organizations together … It helps us vets feel better and helps the public understand them a little better.”

Rex Postlethwait, curator of the Northcoast Veteran’s Museum in Gibsonburg, brought an exhibit called “Bedpan Commandos,” focusing on women who served in the Vietnam War, primarily as nurses. Eight women, including one from Canton, were killed during the war and are on the memorial wall in Washington, D.C.

This is the third year the museum has brought a traveling display to Washington Square for its veterans celebration.

“It’s important for a number of reasons,” Postlethwait said. “It shows veterans we care and also shows others the sacrifice made by individual service men and women.”

The museum display was one of the favorite attractions of John C. Turner of Howland, who did tours in Vietnam and Iraq in a 44-year military career in which he served in several different branches of the military and their reserves.

“I like all of the military exhibits, all of the stuff they used during the war,” Turner said. “I remember a lot of that stuff.”

He thanked Washington Square for the special event and what it does year round.

“They take care of our brothers and sisters,” he said. “Their employees do an outstanding job.”