Scouts out of their gourds

Youth hurl pumpkins through the air 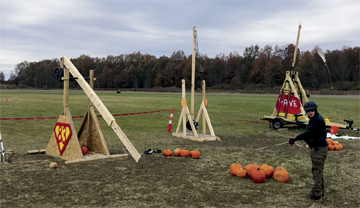 BAZETTA — On a chilly Saturday afternoon at the Trumbull County Fairgrounds, Boy Scouts from throughout Northeast Ohio gathered to send off the Halloween season with a smash.

They lined wooden catapults in a row resembling a scene from a medieval battle. Hundreds of the bright orange gourds faced their demise as they were hurled through the air by packs of eager Boy Scouts. This is widely known as ‘Punkin’ Chunkin.’

“Yeah I’m having a pretty good time,” said Bran Duncan, 13, of Cortland. “Well, we’re making giant catapults essentially, and we’re launching the pumpkins to see how far we can go.”

According to the organizer of the event, Tim Sandor of Cortland, four Scout groups from Cortland, Niles, Girard and Westlake built “trebuchets,” which are a type of catapult. The idea was inspired by an online search of unique events for the Scouts to participate. When researching, they saw that other Scout districts and councils had done the pumpkin toss.

“We had about 100 people. Scouts, scout leaders, and parents registered. And we probably had about 50 friends and family and members of the public that came this morning to see the first half of the competition,” Sandor said. He also explained the event is a learning opportunity for the scouts.

“The way we look at it is, not many youth in the 10-to-18 range even know what a trebuchet is and far fewer still have even touched one and know the physics behind it and it’s a real learning experience for the boys to be able to figure out the physics and see how changes affect how the pumpkins fly,” Sandor said.

There are six rounds of throws and Sandor anticipates the 8-to-10-pound pumpkins average 150 to 250 feet.

According to event officials, the pumpkins can reach up to 500 feet in distance launched. The event was hosted by the Arrowhead District, Great Trail Council Boy Scouts.

The troop who launches their pumpkin the farthest will receive an award and another award will be given to the troop who has the most scout spirit and decorations.

“This is the first year. One of the other leaders is in charge of some winter and fall camping activities and researched and came up with this idea. It’s popular in a lot of other places. So we decided we would give it a whirl.” said Linny Harden of Niles, who helped chaperone at the event.