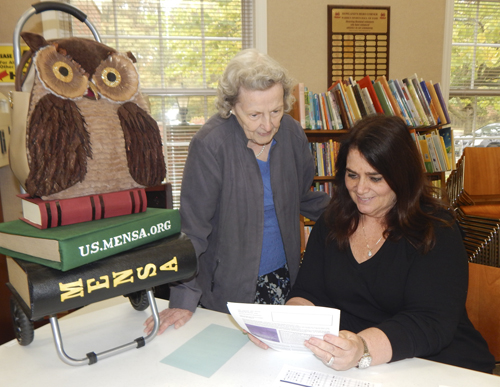 HOWLAND — Marilyn Carpenter is on a quest for smart people. But mostly she just likes meeting people, period.

A couple of weeks ago, Carpenter visited the Howland Branch Library in her role as proctor to administer the Mensa intelligence examination to anyone who wanted to put their brains to the test.

Mensa International is the largest and oldest high IQ society in the world. Its membership is open to people who score in the 98th percentile or higher on standardized intelligence tests.

It’s an honor that some people don’t want to admit.

“Having it on your resume can help or not. Some having it on their resume see it as a plus, while others may view it as a threat,” she said.

Some people admire a high IQ. Others view the Mensa honor as arrogance, she said.

The retired nurse with a degree in psychology and educator whose teaching career included the Trumbull Career and Technical Center, said she did not tell many people when she tested into Mensa in 2004. People often treated her differently when they found out.

Outside of administering the tests, she said she still rarely talks about it because it can push some people away.

The resident of North Jackson, just over the Trumbull County line, said she got involved with Mensa after her husband died. Now she travels to 14 northeastern Ohio counties as a volunteer Mensa proctor.

“Since I am retired, doing this keeps me busy. I enjoy traveling and meeting people. I like mind games and so do many others I have met,” she said.

Carpenter considers Mensa a type of support group in which members get together and spend time talking and sharing stories.

“The members get together once a year. We can sit down and have conversations on many topics. Everyone respects your opinions. It is always very enriching to spend time with others,” she said.

She said there is a national gathering of Mensa members held each year in a different state, with people coming from other countries, including many in Europe. Some years, 200 to 300 people get together. One year, they met in San Diego, another year in Indianapolis and once in Ohio, she said.

“I think we all enjoy the camaraderie and spending time together,” Carpenter said.

One of the people testing in Howland last month was former Warren resident Gina Lingerfelt, who now lives in Pittsburgh.

“I have always thought about taking the tests. I researched it about a year ago,” Lingerfelt said. “This location was probably the first chance I had to take the tests. This was the closest testing place.”

Carpenter said the national office of Mensa will look over tests.

“Mensa will usually send a letter two weeks after the test is taken congratulating the person telling them they are eligible to join. If not, Mensa will indicate the person is unable to join at this time,” she said.

That’s not necessarily a sign that someone isn’t intelligent enough. Everyone has a bad day, and sometimes bad days fall on test days. Try again.

The next Mensa testing in Howland is scheduled Jan. 18.

“Many people will contact me and sign up online (at us.mensa.org). I have been to many places,” Carpenter said. “People have come from Columbus to take the test.”

She said that not only does she like visiting different communities and meeting people, she often keeps in touch with the people who have tested.